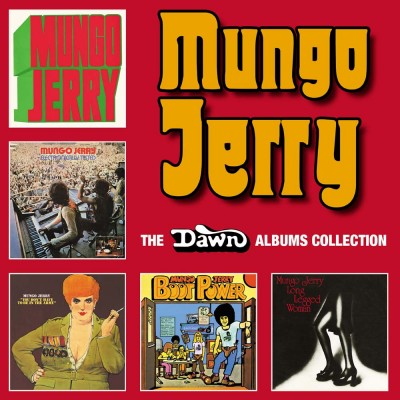 Mungo Jerry’s ‘The Dawn Albums Collection’ – an 81 track five disc CD box set that rounds up all of Mungo Jerry’s recordings for the Dawn label between 1970-74 came out on Friday and we have a limited number of signed editions up for grabs!

Mastered from original tape sources by James Bragg and with bonus content galore, there’s plenty to with this set, which is housed in a clam shell box with each CD in its own cardboard wallet depicting the original LP artwork.

The booklet contains liner notes by Alan Clayson plus stacks of picture sleeves from around the globe to get the collectors updating their “wants” lists!

A true Rock icon, Ray Dorset aka Mungo Jerry is still touring the globe to this very day and has been actively involved in the production of this box set.

Signed copies are already proving popular, so grab one before they’re gone!

Posted by Jack Clough / 242
Lemon Recordings is our March Label Of The Month! Bag some Classic Rock flavoured bargains with the code: LEMONMARCH20 for 20% off. *Please note this... Continue reading

Posted by Jack Clough / 436
Esoteric continue their series of Jon Anderson reissues with 1982’s ‘Animation’. Find out all about this expanded and remastered edition here… Esoteric Recordings are pleased... Continue reading

Posted by Jack Clough / 503
Stacks of new Cherry Red releases, box sets, and compilations are waiting for you to delve into this #NewMusicFriday! Including 'The Cold Sacrifice', a brand... Continue reading