We are so excited to announce our releases for Record Store Day 2021! Limited Edition vinyl treasures from Toyah, Buzzcocks, Howard Jones, Procol Harum, Jon Anderson, The Residents, and Trapeze will be arriving at a participating record shop near you on 12th June / 17th July, find out more at: https://recordstoreday.co.uk/stores/ #RSD21 #RSDDrops 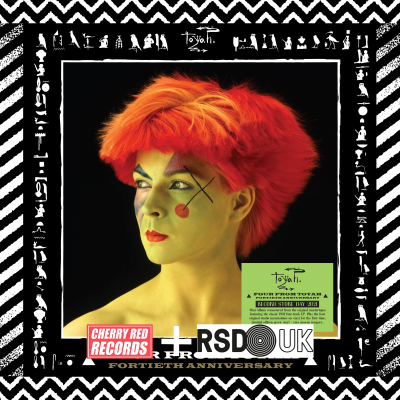 Produced by Nick Tauber and introducing a new band line-up the EP was led by the song ‘It’s A Mystery’ which became a hit and entered the top 40 UK singles chart, rising to no.4 in February 1981 and earning a silver certification from the BPI in March 1981. ‘It’s A Mystery’ became one of Toyah’s signature songs and is still performed to this day.

Side Two includes the four original demo/incarnations of the songs which all started life in previous recording sessions, and again are remastered from the original mastertapes for the first time ever.

It’s A Mystery began life as a song by the late 70s experimental synthesiser group Blood Donor with guest vocals by Toyah Willcox. The demos of Revelations (titled Jack & Jill) and War Boys (titled The Merchant & The Nubile) were recorded at Park Gates Studios in Battle, Sussex by the ‘Blue Meaning’ band line-up, the location where they also recorded The Blue Meaning album. The demo of Angels & Demons was recorded in late 1980 at Eel Pie Studios, Eel Pie Island. All four tracks on Side Two are previously unreleased on vinyl.

The release carries stunning new artwork including previously unseen shots from the classic photography for “Four From Toyah” which saw Toyah in four different striking and meticulous looks representing all four songs. 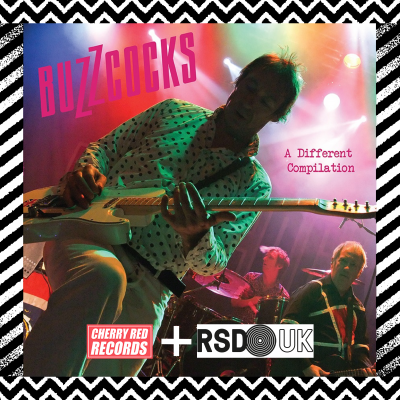 Intended to capture their explosive and hugely popular live set in the studio, “A Different Compilation” sees Buzzcocks, led as ever by Pete Shelley and Steve Diggle, re-visit 24 of their best loved songs, bringing a new energy to those familiar tunes.

Performed with all of the energy and pace of a live show, and captured in a raw and uncompromising state, ‘A Different Compilation’ sits as a perfect companion to the original recordings, and was a huge hit among fans on its original release.

Now available on vinyl for the first time, and spread across two glorious pink LPs, this is the perfect opportunity to revisit some old friends and see how well they’ve grown! 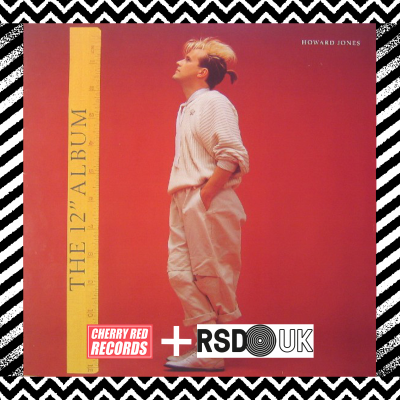 Originally released on vinyl only between his first two studio albums (Human’s Lib and Dream Into Action) for the European market on 8th December 1984 (and later on CD in 1988), Cherry Red are pleased to announce for Record Store Day 2021 that they will be re-issuing a remastered version of Howard Jones The 12” Album on translucent red vinyl.
This was Jones’ first album to feature 12” mixes and was once again produced by Rupert Hine and mixed by Stephen W. Tayler, who also mixed Jones’ first 2 studio albums. The album was recorded and mixed at Farmyard Studios in England.
The album peaked at number 15, spent 33 weeks in the UK Chart and was certified Gold selling in excess of 100,000 copies. For the first time, Jones’ music became part of a mix culture with The 12″ Album containing six remixed tracks, each one segued into the next.

• Strictly limited-edition translucent red vinyl LP
• Remastered from the original mastertapes, four of the tracks on the album are previously unreleased by Cherry Red in this remastered format.
• Inner sleeve contains brand new sleeve-notes by Stephen W. Tayler (who mixed the tracks on The 12” Album) and Glenn Kelly plus rare and unseen imagery.
• This is the first official vinyl LP release of this album outside of Europe

1. Like To Get To Know You Well (International Mix)
2. Pearl In The Shell (Extended Mix) *
3. Total Conditioning * 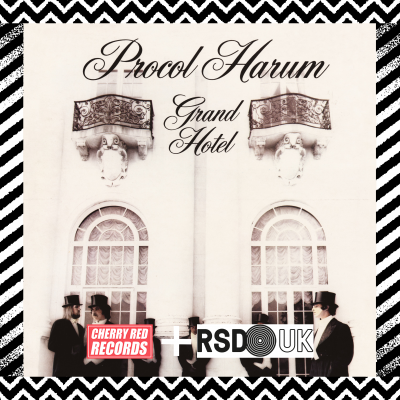 Released in March 1973 the album was the first to feature a line-up of Gary Brooker (piano, vocals), Alan Cartwright (bass), Chris Copping (organ), Mick Grabham (Guitars) and B.J. Wilson (drums) and was remarkable for its musical diversity and was hailed as “A masterpiece of musical perfection and lyricism” by the NME weekly music paper.

From the sumptuously orchestrated title track, to compositions such as For Liquorice John, Fires (Which Burnt Brightly), Bringing Home the Bacon, Toujours L’Amour and Robert’s Box, “Grand Hotel” defied classification but remains one of Procol Harum’s best loved and most admired works.

This Esoteric Recordings edition has been newly re-mastered from the original album master tapes and was cut at Abbey Road studios. The limited-edition LP release fully restores the stunning original gatefold sleeve and the deluxe lyric book which came with initial copies of the album. 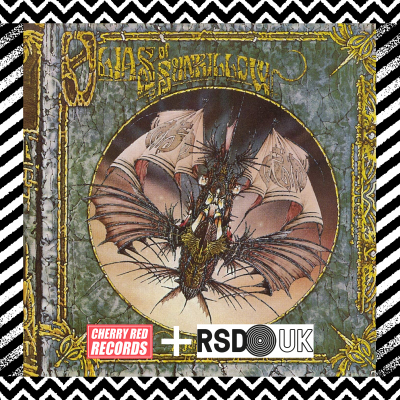 Esoteric Recordings is proud to announce the Record Store Day 2021 release of a strictly limited edition newly re-mastered 180 gram vinyl LP edition of the classic debut solo album by YES vocalist JON ANDERSON, Olias of Sunhillow. Released in July 1976, the album was a conceptual work recounting the story of an alien race on a journey to find a new world following volcanic destruction on their home planet. All music on the album was written and performed by Jon Anderson and the recording took place at Anderson’s Buckinghamshire home studio whilst Yes were on hiatus following the tour to promote the album Relayer.
Initially recorded on an 8-track tape machine, the arrangements were then re-recorded on to a 24-track tape machine. The album saw Jon perform the music entirely alone, teaching himself to play keyboards and acknowledging the influence of suche legendary musicians as Rick Wakeman, Patrick Moraz and Vangelis on his work. Indeed, it was even rumoured Vangelis performed on the album, something the maestro would deny in interviews.
Olias of Sunhillow was released by Atlantic Records in the summer of 1976 in an elaborate gatefold sleeve designed by David Fairbrother-Roe and was a top ten album in the UK. This Esoteric Recordings edition has been newly re-mastered from the original album master tapes and was cut at Abbey Road studios. The limited edition LP release fully restores the stunning original gatefold sleeve and inner bag artwork. 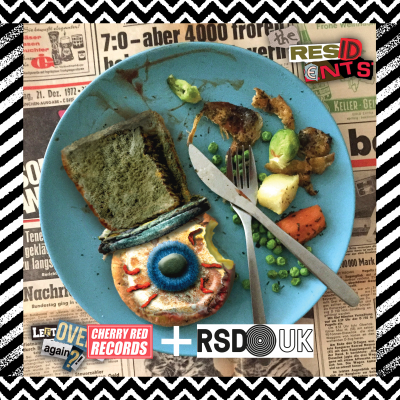 • THE RESIDENTS PRESENT 16 ALTERNATE INTERPRETATIONS, UNRELEASED ODDITIES AND HISTORICAL ARTIFACTS
• RECENTLY DISCOVERED IN THEIR EXTENSIVE 1970s MULTI-TRACK TAPE ARCHIVE AND EXTRACTED FROM THE ORIGINAL TAPES
• NEVER BEFORE ISSUED IN ANY FORMAT
• PRODUCED BY THE RESIDENTS

Following the enthusiastic critical and commercial response to their pREServed reissue series, which has produced hundreds of previously unheard recordings from the band’s master tape archive, The Residents now explore the original multitrack tapes for their seminal 1970s output.
Produced under lockdown conditions, the group present sixteen never before heard alternate versions, unreleased curios and long-forgotten oddities.
Includes an eight minute concentrate of the legendary ‘Rusty Coathangers For The Doctor’ tape, plus a demo and alternate rendering of the classic ‘Satisfaction’ single.
Part of the ongoing pREServed reissue series, “Leftovers Again?!?” is, we are told, a small taste of further album-by-album multitrack explorations the group intend to present at some as-yet undisclosed point in the future.

1. Rusty Concentrate
2. Woopy Snorp Rdx
3. What?
4. The Idiot Bastard Son Of ‘What?’
5. Primal Satisfaction
6. An Afternoon With Barry 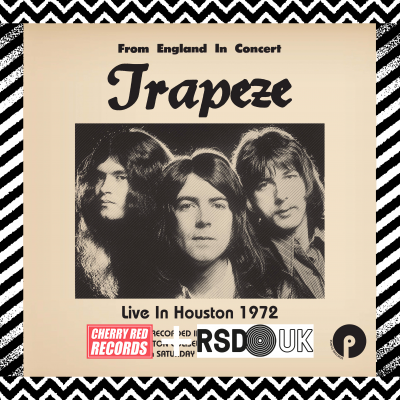 The core of Trapeze can be traced back to Midlands band Finders Keepers in the late 1960s, featuring future Whitesnake guitarist Mel Galley, future Judas Priest drummer Dave Holland and the mercurial talents of Glenn Hughes on bass and vocals. After being discovered by The Moody Blues, they were snapped up for their own label, Threshold Records.
Trapeze would record three classic albums for Threshold; the self-titled “Trapeze” in May 1970, “Medusa” in November 1970 and “You Are The Music • We’re Just The Band” in 1972.

By the time of their second album, Trapeze had scaled down to the classic power trio of Galley, Holland and Hughes, finding their definitive sound with a unique blend of blues, soul and hard rock, earning them plenty of fans in America.

One of Trapeze’s major strongholds in the States was Texas, so we’re lucky to be able to present a complete 1972 show from Houston recorded live in concert to promote their third record. Featuring ‘Way Back To The Bone’, ‘You Are The Music’ and ‘Keepin’ Time’ from “You Are The Music • We’re Just The Band”, the remainder of the set was taken from second LP, “Medusa”. This double live LP includes truly epic renditions of ‘Jury’, ‘Seafull’, ‘Your Love Is Alright’ and the title track of “Medusa”.
Glenn Hughes would leave Trapeze to join Deep Purple in 1973, with Mel Galley and Dave Holland carrying the Trapeze banner for the remainder of the 1970s, periodically reforming this classic three-piece line-up. Glenn would eventually form Hughes / Thrall, join Black Sabbath, enjoy a successful solo career, collaborate with artists as varied as Gary Moore, Joe Lynn Turner and the KLF, founding Black Country Communion and California Breed, and currently fronts The Dead Daisies.

Posted by Jack Clough / 19
• There are few artists in country music more highly praised, or influential, as Lefty Frizzell. With a vocal styling often imitated but never matched,... Continue reading

Posted by Jack Clough / 200
#NewMusicFriday is here and we’ve got a hefty dose of reggae sounds to add to your collection, with two new reissues from Doctor Bird. PLUS... Continue reading

Posted by Jack Clough / 161
Our Official Spotify Playlists are always being updated with fresh tracks, whether that be new Cherry Red releases, hidden catalogue gems, or genre-defining classics, you... Continue reading

STRAWBS| ‘Settlement’ the new album from Strawbs lands at Number 2 in the Official Folk Album Chart!

Posted by Jack Clough / 150
‘Settlement’, the new album from the legendary Strawbs has landed straight in at Number 2 in the Official Folk Albums Chart! Not heard it yet?... Continue reading