We use cookies to ensure that we give you the best experience on our website. Click OK to accept and continue shopping, or find out more in our cookie policy...OKRead More
Return to previous page
View cart “Kissing The Pink: What Noise, Special EditionKissing The Pink” has been added to your cart. 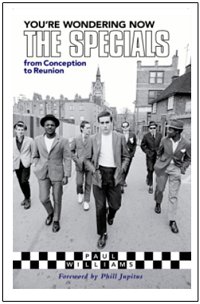 1979. The dawning of a new era. Against the backdrop of the demise of punk, social unrest and the coming to power of Margaret Thatcher, The Specials burst onto the scene with their unique brand of music, sweeping up the nation’s youth with their edgy, politically-charged message and iconic ‘2Tone’ branding. Thirty years later, as the band celebrate their anniversary with a reunion tour, their hard hitting, poignant tales of teen pregnancy, knife crime and racism are still as prevalent as they always were.

Timed to coincide with the band’s Anniversary and the huge revival of interest that has aroused this year, this is the only book of its kind, meticulously detailing the story of this one-of-a-kind band, its members and their post-Specials careers, up to and including their reunion at Bestival in 2008. It also sees the first publication of a full gig listing, complete discography and an amazing collection of rare, unseen photographs from the band themselves. It also contains a foreword from Phill Jupitus.

Paul Williams is a concert promoter, creator and editor of the 1990s cult fanzine “Street Feeling”, administrator of The Specials website and valued contributor to many varied projects within the lively ska world. His life-long interest in The Specials inspired him to be the first to research and document the bands’ history, which he portrays with an easy, familiar style, making their story accessible to all.