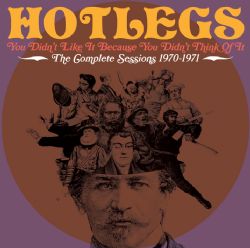 You Didn’t Like It Because You Didn’t Think Of It, The Complete Sessions 1970-71
Hotlegs

SKU: CRSEG024
Categories: 10.95, Grapefruit, Grapefruit Christmas Sale, Physical, Sitewide Sale
Share:
Description
·
Thanks to the
novelty hit nature of the million-selling forty-five ‘Neanderthal Man’ (only
prevented from topping the British singles chart in the summer of 1970 by Elvis
Presley’s ‘The Wonder Of You’), little attention was paid at the time to the
other recordings cut by pre-10cc act Hotlegs.
·
That’s a shame,
because the album Hotlegs Thinks: School
Stinks (quickly remodelled and repackaged as Song) was a veritable smorgasbord of turn-of-the-decade studio pop
moves that deserves to be considered alongside the heavyweights of the
era. With its roots in the aborted 1969
Frabjoy & Runcible Spoon (aka Kevin Godley & Lol Creme) album for
Giorgio Gomelsky’s Marmalade label, the Hotlegs LP was a daringly ambitious
creation, peaking on the White Album-era McCartneyish ballads ‘Take Me Back’ and
‘Today’, the equally beautiful, Beach Boys-inspired ‘All God’s Children’ and
the sumptuous, 13 minute song suite ‘On My Way/Indecision/The Return’ (“our
version of Side Two of Abbey Road”,
according to Godley).
·
Housed in
newly-commissioned, more sympathetic artwork, and featuring a new essay on the
band, this definitive Hotlegs anthology reassesses their position in the
overall scheme of things. Gathering
together every track issued in the group’s name, including both versions of the
album, a couple of non-LP singles and even a US-only remix of The Hit, You Didn’t Like It Because You Didn’t Think
Of It reveals that, notwithstanding that anomalous novelty song, Lol Creme,
Kevin Godley and Eric Stewart were master pop craftsmen even before adding
Graham Gouldman to the line-up and changing their name to 10cc…