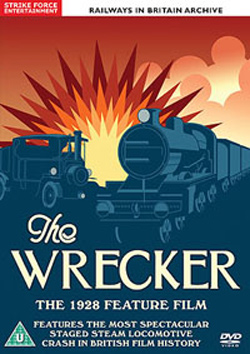 A demented crook organises a series of deliberate train crashes to discredit the railways in favour of a rival bus company. Filmed in 1928 on the soon to be abandoned Basingstoke to Alton branch line and making extensive use of many other Southern Railway locations, The Wrecker contains the most spectacular staged steam locomotive crash in the history of British Film recorded by no fewer than 22 cameras. This newly restored version features an all-new score composed by world renowned silent film composer Neil Brand.

FEATURETTE – SHOOTING ‘THE WRECKER’
Presented by Martin Dean at the present day site of the staged crash. 5 mins

FEATURETTE – WALKING THE LINE
An exploration of the remains of Basingstoke And Alton Light Railway track formations with Martin Dean. 16 mins

DERAILMENT – 1944
An archive U.S. Army training exercise filmed on the Claiborne – Polk Military Railroad in 1944. In wartime the sabotage of enemy trains that transported the men and munitions of war was of utmost tactical urgency. 8 mins