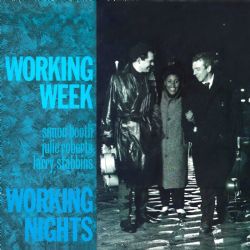 SKU: CDBRED538
Categories: 10.95, Cherry Red Records, Cherry Red Sale, Physical, Sitewide Sale
Share:
Description
Working Week were formed within the vanguard of London’s jazz-dance
scene of the early 1980s.
The collective revolved around Simon Booth and esteemed jazz musician
Larry Stabbins (both previously with Rough Trade act Weekend), and singer Julie
Roberts.
Their debut single ‘Venceremos (We Will Win)’ boasted Tracey Thorn and
Robert Wyatt on vocals and reached the Top 75. Julie Tippetts (nee Driscoll)
sang on the brooding follow-up ‘Storm Of Light’.
Debut album WORKING NIGHTS was one of the cult favourites of 1985,
peaking at No. 23 on the charts and spawning several more singles.
WORKING NIGHTS has long been out-of-print and impossible to find on CD.
This deluxe reissue finally introduces many of their non-album tracks and remixes
to the digital format, including the bonus 12” ‘Stella Marina’ with a rap from
Jalal of The Last Poets.
Also includes two previously unissued live tracks.