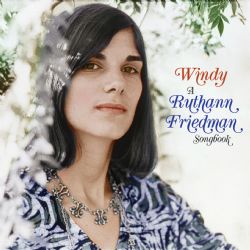 Having written The Association’s ‘Windy’ while living in David Crosby’s basement, RUTHANN FRIEDMAN remained an intriguing and mysterious figure of ‘60s pop for decades.

Until recently her released output consisted of a lone folk album issued in 1970. Unbelievably, many fascinating recordings she created with some of the most revered names in West Coast pop have remained locked away in the vaults… until NOW!

Musicians include RANDY NEWMAN, RON ELLIOTT of The Beau Brummels, and RUSS GIGUERE from The Association! One listen to this CD and you’ll wonder why Ruthann didn’t have more hits of the magnitude of “Windy.”Mastered by Alan Brownstein FROM THE ORIGINAL MASTER TAPES!

The full-colour booklet includes rare photos and extensive liner notes featuring the participation of Ruthann herself!