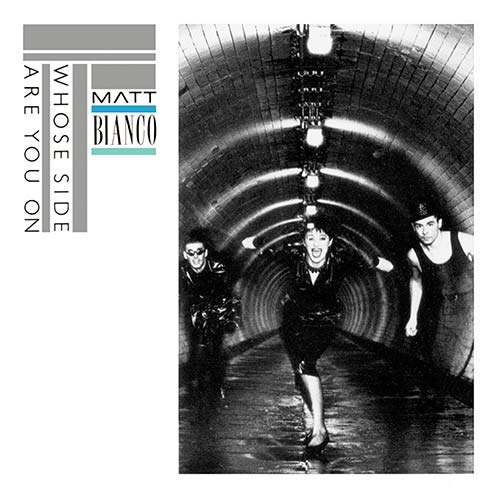 Whose Side Are You On: 2 CD Deluxe Edition
Matt Bianco

(Please note all signed copies have now sold out!)

Now, for the first time ever, “Whose Side Are You On”, the debut album by continental, Latin Jazz, pop combo MATT BIANCO, has been remastered and expanded.

• Now, for the first time ever, “Whose Side Are You On”, the debut album by continental, Latin Jazz, pop combo MATT BIANCO, has been remastered and expanded.

• The deluxe edition of “Whose Side Are You On” follows the success of expanded reissues of “Time And Tide” and “London Warsaw New York” by Basia, who started her rise to fame as a member of MATT BIANCO. Her distinctive vocals forming part of the band’s unique sound.

• Originally released in 1984, “Whose Side Are You On” (UK #35) achieved platinum and gold sales status throughout the UK and Europe. MATT BIANCO were part of the sophisticated pop sound that included SADE, CARMEL, SWING OUT SISTER, and many others during the mid-80s.

• BASIA defined the smooth jazz radio format in the US in the late 80s and early 90s. She became one of their signature artists and went on to sell over 6 million albums in the US. After her departure from MATT BIANCO in 1985, the band continued, fronted by original member MARK REILLY. They went on to have further success with the singles ‘Yeh Yeh’ (UK #13) in 1985, ‘Don’t Blame It On That Girl’ (UK #11) in 1988, and the dance classic ‘Wap-Bam-Boogie’.

• This 2CD deluxe edition features 33 tracks. The original 10-song album sits alongside 23 bonus tracks, including 14 that mark their appearance on CD for the first time, seven of which are previously unreleased.

• The bonus material on this collection features all of the single versions, b-sides, remixes, and alternate versions that were released during the promotion of the original album. Also included are six demos and a brand new recording of ‘Half A Minute’.


1. WHOSE SIDE ARE YOU ON (EXTENDED VERSION)

6. GET OUT OF YOUR LAZY BED

8. SNEAKING OUT THE BACK DOOR

9. RIDING WITH THE WIND

11. MORE THAN I CAN BEAR (Original UK Album Version)

1. GET OUT OF YOUR LAZY BED (Extended Version)*

5. SNEAKING OUT THE BACK DOOR (Extended Version)*

8. HALF A MINUTE (Extended Version)*