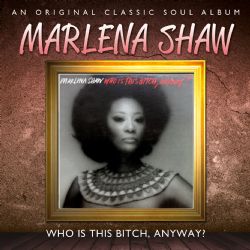 Who Is This Bitch, Anyway
Marlena Shaw

By the early ‘70s, Marlena Shaw had already established herself as a potent live performer and recording artist, thanks to such tunes as ‘Woman Of The Ghetto’ and ‘California Soul.’

In 1973, the upstate New York-born vocalist became the first female singer signed to the prestigious Blue Note label and her fourth album for the company, 1975’s WHO IS THIS BITCH, ANYWAY? reached No. 8 on Billboard’s Jazz charts and No. 47 on the R&B listings.

WHO IS THIS BITCH, ANYWAY? was produced by Bernard Ighner (the writer of the classic ‘Everything Must Change’) who assembled top musicians such as drummer Harvey Mason, bassist Chuck Rainey and guitarists Larry Carlton and David T. Walker for the sessions.

Standout tracks include Marlena’s version of Roberta Flack’s ‘Feel Like Making Love,’ the Shaw favourite ‘Loving You Was Like A Party’ and the slice-of-life ‘You, Me And Ethel’ and ‘Street Walkin’ Woman,’ laced with Shaw’s well-known sassy brand of mother wit and humour.

Out of print outside of Japan for several years, WHO IS THIS BITCH, ANYWAY? includes notes by renowned U.S. writer Gary Jackson including 2012 quotes from Marlena and Harvey Mason.

WHO IS THIS BITCH, ANYWAY? is the second reissue from Marlena’s Blue Note catalogue on SoulMusic Records, following the best-selling “From The Depths Of My Soul” (SMCR-5027).

Additional information
Tracklist
1.
YOU, ME AND ETHEL/STREET WALKIN' WOMAN

2.
YOU TAUGHT ME HOW TO SPEAK IN LOVE

5.
THE LORD GIVETH AND THE LORD TAKETH AWAY

6.
YOU BEEN AWAY TOO LONG

9.
A PRELUDE FOR ROSE MARIE