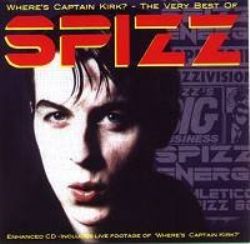 Spizz came to prominence in 1978 supporting Siouxsie & the Banshees as half of the punk skiffle duo SPIZZOIL. Following an invitation to session on the John Peel show (the first of four), Rough Trade Records released two EPs. 6000 Crazy & Cold City. Their first single Soldier Soldier (Spizz¹s third) was awarded N.M.E. Single of the Week. Later that year came another Single of the Week awarded by Melody Maker’s Chris Bohn for Where’s Captain Kirk? Released at the same time as the first Star Trek movie, it topped the newly formed Indie Chart and stayed there for eight consecutive weeks, it also remained in that chart for the whole of 1980.

Fifth single No Room was an instant Indie chart topper and subsequently A&M signed the band, releasing their first LP Do A Runner. It was a top ten hit in the proper charts and ALL their releases re-entered the Indie chart.

The band always containing Spizz has gone through many a name change in the intervening years. Singles and albums have been released under the band names Spizzles, Spizzenergi 2, Spizz Orbit and Spizzmas. R.E.M. even recorded a cover version of Where¹s Captain Kirk? which was produced as a Christmas gift for their fan club membership.

Spizz has continued to perform live and has even recorded a tribute track in honour of his beloved Aston Villa FC which is included here along with an enhanced bonus track of video footage of the track Where’s Captain Kirk? live from the Holidays In The Sun punk festival which is playable on PC and Mac computers.