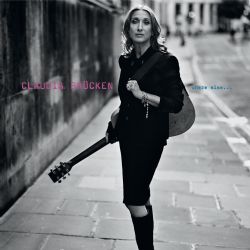 Where Else
Claudia Brücken

Claudia Brücken’s third solo album ‘Where Else’ (follow up to 2012’s acclaimed collection of cover versions, ‘The Lost Are Found’) is, with the exception of Nick Drake’s ‘Day Is Done,’ a self-penned collection of songs that explores different genres and styles – it moves through and around folk, blues, rock, film score, country and electronic music. Every album of her career, solo or in groups, has been a way of demonstrating her passion for evocative musical atmosphere, but this is the first one that does so without relying on computers and synthesisers. As Claudia says: “I always collaborate with different producers and programmers who are obviously bringing a lot of themselves into the project, and a lot of studio gadgetry. Normally my musical settings have been electronic music, whereas with this album, although there are elements of electronica in there, it soon became clear that the sound was going to be as much rooted in folk, blues and even country rock, and for me this was novel and exciting. It was actually exotic. The guitar could create special effects instead of the usual machines, which have become much more ordinary than they were when I first started.”

The album is a collaboration with co-writer and producer John Williams (Housemartins, Proclaimers, Paul Heaton & Jacqui Abbott, Blancmange, Petula Clark) and was written and recorded in the winter and spring of 2014 at John’s studio in North Kensington. Used to constructing songs in a more abstract electronic setting, Claudia felt it important that in this new environment, each new song they wrote could be sung accompanied only by piano or guitar. It was only then that the songs were ready to be recorded.

Influences on ‘Where Else’ were varied. For Claudia, the Velvet Underground and Lou Reed, Depeche Mode and Roy Orbison. For John, Jimmy Webb, JJ Cale and The Zombies set the standard. On ‘Where Else’, these reference points deftly interact. Claudia elaborates: “Some of the albums I’ve recorded were albums of other people’s songs, and that has definitely made me think harder as a song writer about how to get across complicated feelings as economically as possible. The story aspect of a song has always been a very important part for me – for example the first song of the album (‘I Want You’) was inspired by Lou Reed’s method of storytelling. John’s background is a lot different to mine; he’s really into artists like Nick Drake and singer song writers. That brought a lot of elements into the writing that were fresh to me. The songs basic architecture was developed in a very different way than when you mostly use machines. The guitar being at the centre of the writing and recording took me towards more of a blues and folk sound – I think people will be surprised how different this album sounds because of that but in the end it’s still about songs, and storytelling, and singing.”

As she recorded the album, Claudia learned to play guitar – an instrument she had toyed with as a teenager before the electronically ethereal sounds of Kraftwerk and synths took over and took her somewhere else. As she learned to play the guitar, she learnt to play her favourite songs by artists as diverse as Marlene Dietrich, Patti Smith and The Temptations – and out of this, these new songs with new textures, spaces and intentions began to emerge.

‘Where Else’
follows the lyrical thread of Claudia’s debut solo album ‘Love And A Million Other Things.’ The album is not only a collection of moods and styles but a further examination of the vagaries of love; exploring emotion, beginnings, endings, past life and future hopes. “That’s my nature,” says Claudia. “I want to explore different styles, a big reason why the title ‘Where Else’ suits me – where else will I go? What will I do next? ”

2. Nothing Good Is Ever Easy

Additional information
Tracklist
As above.
Reviews (0)