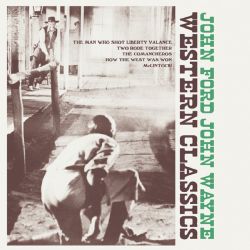 SKU: ACMEM289CD
Categories: 9.95, El, El Records Sale, El! Christmas Sale, Physical, Sitewide Sale
Share:
Description
“This is the West, sir. When the legend becomes fact, print the legend!”
– Maxwell Scott in ‘The Man Who Shot Liberty Valance’
• John Ford and John Wayne are undisputed giants of the western movie genre. One, America’s most eloquent director, the other a vastly popular but often underrated actor described by one of his biographers as “the greatest of all works of art.”. Among the films they completed together were such eternal masterpieces as The Searchers, The Quiet Man, and the cavalry trilogy; Fort Apache, She Wore A Yellow Ribbon and The Rio Grande.
• “I’d like to get up on housetops and shout about what I owe to John Ford,” said Wayne, ‘I simply owe him every mouthful I eat, every dollar I’ve got and practically every happiness I know, that’s all.’
• Wayne repaid Ford several times over, with a succession of indelible performances that for many defined the Wild West and which will always retain their power.
• Orson Welles held Ford in the highest esteem, considering him worthy of being spoken of in the same breath as D.W. Griffith or Von Stroheim, indeed the young Orson learned to make movies by running Stagecoach over and over, disseminating and absorbing its every detail.
• Forever synonymous with the mythic landscape of Monument Valley, John Ford’s best work has a lyrically romantic tone which captivated such international filmmakers as Akira Kurosawa, Ingmar Bergman, Francois Truffaut and Satyajit Ray. The British critic-turned-director Lindsay Anderson recognised the poetry in Ford and wrote an indispensable book, ‘About John Ford’. Peter Bogdanovich also got close to the often contrary, sometimes acerbic, director and contributed both a book and a fascinating documentary, ‘Directed by John Ford’.
• Our presentation includes music from Ford’s last great work, the psychological western, The Man Who Shot Liberty Valance, including the rare Fairmount Singers version of the Burt Bacharach – Hal David penned theme song, the original soundtrack of the curved-screen three-projector Cinerama epic, How the West Was Won, a portmanteau film to which Ford contributed the best thing in it, a short civil war episode. The programme also contains the main title and a waltz from the officer’s dance at Fort Grant from Ford’s James Stewart / Richard Widmark vehicle, Two Rode Together,  Lonnie Donegan’s hit recording of the theme song from the fine Wayne western, The Comancheros, which he in part directed, and the Frank Devol / ‘By’ Dunham score for McLintock!, which reunited “Duke” with the immortal Maureen O’Hara.

N.B This title is released 18th May and will not be dispatched before this date.
Track Listing:
THE MAN WHO SHOT LIBERTY VALANCE
1. THE MAN WHO SHOT LIBERTY VALANCE – MAIN TITLE (CYRIL J. MOCKRIDGE)
2. (THE MAN WHO SHOT) LIBERTY VALANCE (THE FAIRMOUNT SINGERS)
TWO RODE TOGETHER
3. TWO RODE TOGETHER – MAIN TITLE (GEORGE DUNING)
4. ON THE BEAUTIFUL BLUE DANUBE (LEOPOLD STOKOWSKI)
THE COMANCHEROS
5. THE COMANCHEROS (LONNIE DONEGAN)
HOW THE WEST WAS WON (ALFRED NEWMAN – KEN DARBY)
6. OVERTURE  (I’M BOUND FOR THE PROMISED LAND/SHENANDOAH/ENDLESS PRAIRIE/THE OX DRIVER/I’M BOUND FOR THE PROMISED LAND)
7. MAIN TITLE “HOW THE WEST WAS WON”
8. BEREAVEMENT AND FULFILLMENT
9. THE RIVER PIRATES
10. HOME IN THE MEADOW (VOCAL: DEBBIE REYNOLDS)
11. CLEVE AND THE MULE
12. RAISE A RUCKUS TONIGHT (VOCAL: DEBBIE REYNOLDS)
13. COME SHARE MY LIFE
14. THE MARRIAGE PROPOSAL (GREENSLEEVES)
15. ENTR’ ACTE
(HOME IN THE MEADOW / 900 MILES / ON THE BANKS OF SACRAMENTO / WHEN JOHNNY COMES MARCHING HOME & I’M BOUND FOR THE PROMISED LAND / BATTLE HYMN OF THE REPUBLIK)
16. CHEYENNES
17. HE’S LINUS’ BOY (THE KEN DARBY SINGERS)
18. CLIMB A HIGHER HILL
19. WHAT WAS YOUR NAME IN THE STATES? (VOCAL: DEBBIE REYNOLDS)
20. NO GOODBYE
21. FINALE “HOW THE WEST WAS WON” (THE KEN DARBY SINGERS
MCLINTOCK! (FRANK DEVOL AND “BY” DUNHAM)
22. MAIN TITLE & KATHERINE THEME
23. HURRY UP HOEDOWN
24. THE OTHER WOMAN
25. ROWDAYOH
26. RUN KATIE RUN
27. MCLINTOCK’S THEME
(PAT WAYNE & STEFANIE POWERS & JERRY VAN DYKE)
28. THE YOUNG
29. THE LOVER’S WALTZ
30. JUST RIGHT FOR ME
31. RED GARTERS
32. THE CAKEWALK
Additional information
Tracklist
Track listing as above.
Reviews (0)