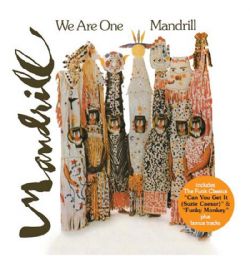 We Are One
Mandrill

SKU: CDMRED542
Categories: 9.95, Cherry Red Records, Physical, Robinsongs, Sitewide Sale
Share:
Description
If any Band encapsulated the essence of Funk’s pan ethnic mind expanding
journey across Africa’s musical Diaspora it was Mandrill
Created in Panama & and raised in Brooklyn New York, Mandrill’s “We
Are One” was their first Album for Clive Davis’ legendary Arista label.
Originally released in 1977 “We Are One” contains two classic slices of
Funk ‘Can You Get It (Suzie Caesar)’ and ‘Funky Monkey’.
On this Robinsongs reissue you also get the 7” versions of these two
cuts as Bonus Tracks. The album also features ‘Happy Beat’ and the single ‘Holiday’.
This re issue also features original sleeve notes by Brendon Griffin.