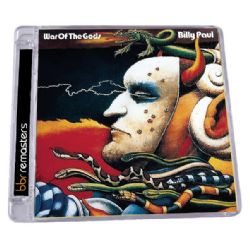 War Of The Gods
Billy Paul

SKU: CDBBR0184
Categories: 9.95, Big Break Records, Physical, Sitewide Sale
Share:
Description
2012 marks the 40th anniversary of the hugely
influential Philadelphia International Records. To mark this, and following our
reissue of some of the labels other acts such as the Three Degrees, Harold
Melvin & The Blue Notes and the O’Jays, we are pleased to present another
album from one of the most identifiable voices of the Philly Sound.
WAR OF THE GODS reached R&B #12 and Pop
#110 upon its release in 1973. Some of the artists backing Billy on this album
are Bobby Eli, Bunny Sigler, Norman Harris, Leon Huff and Ron Baker.
WAR OF THE GODS has also been sampled by the
likes of DJ Shadow, Ludacris, Jaylib, Cappadonna and Ghostface Killah.
THANKS FOR SAVING MY LIFE reached R&B #9
and #37 in the Billboard Hot 100.
Released in deluxe Super Jewel cases, with bonus tracks and extensive
liner notes, WAR OF THE GODS is a must for all Funk, Soul and R&B fans out
there!

Additional information
Tracklist
1. I SEE THE LIGHT
2. WAR OF THE GODS
3. THE WHOLE TOWN’S TALKING
4. I WAS MARRIED
5. THANKS FOR SAVING MY LIFE
6. PEACE HOLY PEACE