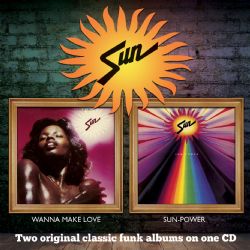 Originally formed in Dayton, Ohio, the self-contained group Sun became prime purveyors of ‘funk and soul alongside other Ohio funkateers such as Bootsy Collins, Dazz Band, Lakeside, Zapp, Slave and of course, the Ohio Players in the ‘70s and early ‘80s.

Founding member Byron Byrd formed a number of different bands before a 1974 iteration (Overnight Low) became Sun after beginning to work with producer Beau Ray Fleming who’d seen the group open for Mandrill. Fleming in turn introduced the newly-named Sun to Capitol executive Larkin Arnold and in 1976, the group cut its funk-filled debut for the label.

Originally entitled “Live On, Dream On,” the nine-track album took off when the single, ‘Wanna Make Love (Come Flick My BIC)’ began spiralling up the U.S. R&B, dance and pop charts spurred on by a campaign by the makers of BIC pens. The album WANNA MAKE LOVE performed well and decades later, the key cut ‘My Woman’ was sampled by a number of prominent rap and hip-hop artists.