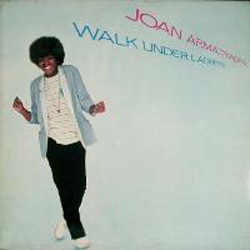 Now with three bonus tracks previously only issued on vinyl as part of the Weakness In Me EP.

The seventies produced a string of great albums, mostly tinged with an acoustic, jazzy, even folky flavour, until, in the late 70’s and early 80’s she found her way into a more pop orientated sound, which is the point at which this collection finds her. Produced by the ever reliable Steve Lillywhite, “Walk Under Ladders” was Joan’s eighth LP and comfortably reached the UK’s Top Ten, and peaking at number 6 on its release in 1981. A set of solid, catchy and artistically respectable songs, this album established the artist as a versatile figurehead at the beginning of the decade.

Notice: id was called incorrectly. Product properties should not be accessed directly. Backtrace: require('wp-blog-header.php'), require_once('wp-includes/template-loader.php'), include('/themes/xstore/woocommerce/single-product.php'), wc_get_template_part, load_template, require('/themes/xstore/woocommerce/content-single-product.php'), do_action('woocommerce_after_single_product_summary'), WP_Hook->do_action, WP_Hook->apply_filters, woocommerce_output_product_data_tabs, wc_get_template, include('/themes/xstore/woocommerce/single-product/tabs/tabs.php'), wpb_new_product_tab_content, WC_Abstract_Legacy_Product->__get, wc_doing_it_wrong Please see Debugging in WordPress for more information. (This message was added in version 3.0.) in /home/cherryredco/public_html/wp-includes/functions.php on line 4986
I'm Lucky/ When I Get It Right / Romancers / I Wanna Hold You / The Weakness In Me / No Love / At The Hop / I Can't Lie To Myself / Eating The Bear / Only One / Bonus Tracks - Shine / Dollars / Crying