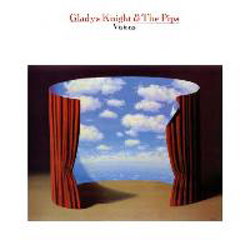 Gladys Knight was born in Atlanta, Georgia in 1944. In 1952 she won the Ted Mack Original Amateur Hour’, a talent show on national television and by the age of nine she’d formed the first version of the Pips with her brother Bubba, plus cousins Their first hit happened in ’61 with a cover of ‘Every Beat Of My Heart’ and in 1966, they switched from original label Vee-Jay to Motown and had a massive success with ‘I Heard It Through The Grapevine’, which became the fastest-selling single in Motown history up until that point.

Over the next several years, the group had a string of hits and awards behind them, before joining the Buddha roster, which led to the biggest hit of their career in 1973, namely ‘Midnight Train To Georgia’.

Another label change in 1980 to Columbia, led in 1981 to the release of the album ‘Touch’ and to ‘Visions’ two years later which gave the group a number one r&b hit in America with ‘Save The Overtime (For Me)’.

Her performances throughout this album are nothing short of stunning. Listen to the way she handles ‘Hero’, with a bravura aplomb that really does indicate that she had a grasp of bringing the gospel approach to soul, while never sacrificing her sensuality. And ‘Heaven sent’ is tailor made for her vocals.

Notice: id was called incorrectly. Product properties should not be accessed directly. Backtrace: require('wp-blog-header.php'), require_once('wp-includes/template-loader.php'), include('/themes/xstore/woocommerce/single-product.php'), wc_get_template_part, load_template, require('/themes/xstore/woocommerce/content-single-product.php'), do_action('woocommerce_after_single_product_summary'), WP_Hook->do_action, WP_Hook->apply_filters, woocommerce_output_product_data_tabs, wc_get_template, include('/themes/xstore/woocommerce/single-product/tabs/tabs.php'), wpb_new_product_tab_content, WC_Abstract_Legacy_Product->__get, wc_doing_it_wrong Please see Debugging in WordPress for more information. (This message was added in version 3.0.) in /home/cherryredco/public_html/wp-includes/functions.php on line 4986
When You're Far Away / Just Be My Lover / Save The Overtime (For Me) / Heaven Sent / Don't Make Me Run Away / Ain't No Greater Love / Seconds / You're Number One (In My Book) / Oh La De Da / Hero (Wind Beneath My Wings)