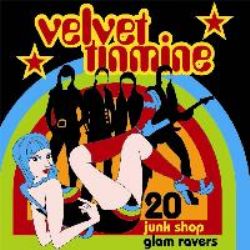 SKU: RETRO851
Categories: 10.95, Physical, RPM, RPM Christmas Sale, Sitewide Sale
Share:
Description
One of the RPM successes in the current decade gets a mascara make
over. Since first release this influential album has been picked up by
many tastemakers and reached as far as two tracks (Slippery Rock 70 s ,
Kick Out The Jams) being included in the movie Hot Fuzz. The album has
also become the centre piece for the newly recognised pop sub –genre
Junkshop Glam .The album has been unavailable for a period but
due to popular demand is now set to return to the turntables. We have
updated the packaging with new and extra photos, revised sleeve notes,
and four different tracks. With stack-heeled beats, handclaps,
tub-thumping, and vamped up rock n roll guitars being as popular now as
ever, this is a good time to get into Junkshop Glam and the star spandex
glories of Velvet Tinmine.
Additional information
Tracklist
Iron Virgin - Rebels Rule / Chaos - Down At The Club / Hello - Another School Day / Warwick - Let's Get The Party Going / Wild Angels Clap Your Hands Stamp Your Feet / Sisters - Kick Your Boots Off / Flame - Big Wheel Turning / Arrows - Toughen Up / Simon Turner - (Baby) I Gotta Go / Brett Smiley Va Va Va Voom / Space Waltz - Fraulein Love / Washington Flyers - The Comets Are Coming / Stavely Makepeace - Slippery Rock 70s / Plod - Neo City / Ricky Wilde - I Wanna Go To A Disco / Kristine Sparkle Eight Days A Week / Tartan Horde - Bay City Rollers We Love You / Big Wheel - Shake A Tail Part 1 / Fancy - Wild Thing / Tubthumper - Kick Out The Jams
Reviews (0)