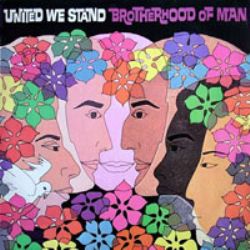 United We Stand
Brotherhood Of Man

SKU: RETRO826
Categories: 10.95, Physical, RPM, RPM Sale, Sitewide Sale
Share:
Description
In the beginning, Tony Hiller created The Brotherhood of Man. Formed in the recording studio and launched into a world at war over Vietnam, peace certainly won the day on vinyl in 1970 with the group‘s top ten single ‘United We Stand’ and accompanying album’s original sleeve notes announcing the groups arrival “with an eloquent and convincing plea to unite”.
The Brotherhood of Man would eventually win a very different war with a very different line-up in Europe at the Eurovision Song Contest in 1976. A different time, place, sound. RPM’s collection, concentrates on their old testament with chief peacemakers Johnny Goodison, Tony Burrows, Roger Greenaway, Hal Atkinson, Russell Stone and the brit girl sisterhood of Sue Glover and Sunny Leslie. Featuring the complete 1970 album now with corresponding non-album Asides and B-sides together with Sue and Sunny’s soulful Deram 45s from the same period. United We Stand unites the best session singers and songwriters of the late sixties and early seventies in total harmony with both their record buying public and the charts of the times.
Additional information
Tracklist
United We Stand - Love Is A Good Foundation / Say A Prayer / A Little Bit Of Heaven / For The Rest Of Our Lives / Sing In The Sunshine / Where Are You Going To My Love / For Old Times Sake / Living In The Land Of Love / Too Many Heartaches / Love One Another / United We Stand / Bonus Tracks- This Boy - Deram Dm 317 / You Can Depend On Me - Deram Dm 317 / Ain't That Telling You People - Deram Dm 318 / Didn't I Blow Your Mind - Deram Dm 318 / Reach Out Your Hand - Deram Dm 327 / Better Tomorrow - Deram Dm 327 / Freedom - Deram Dm 328 / Break Up - Deram Dm 328 / You And I - Deram Dm 335 / California Sunday Morning - Deram Dm 341 / Do Your Thing - Deram Dm 341 / I'm Gonna Make You Love Me - Deram Dm 355 / High On The Thought Of You - Deram Dm 355
Reviews (0)