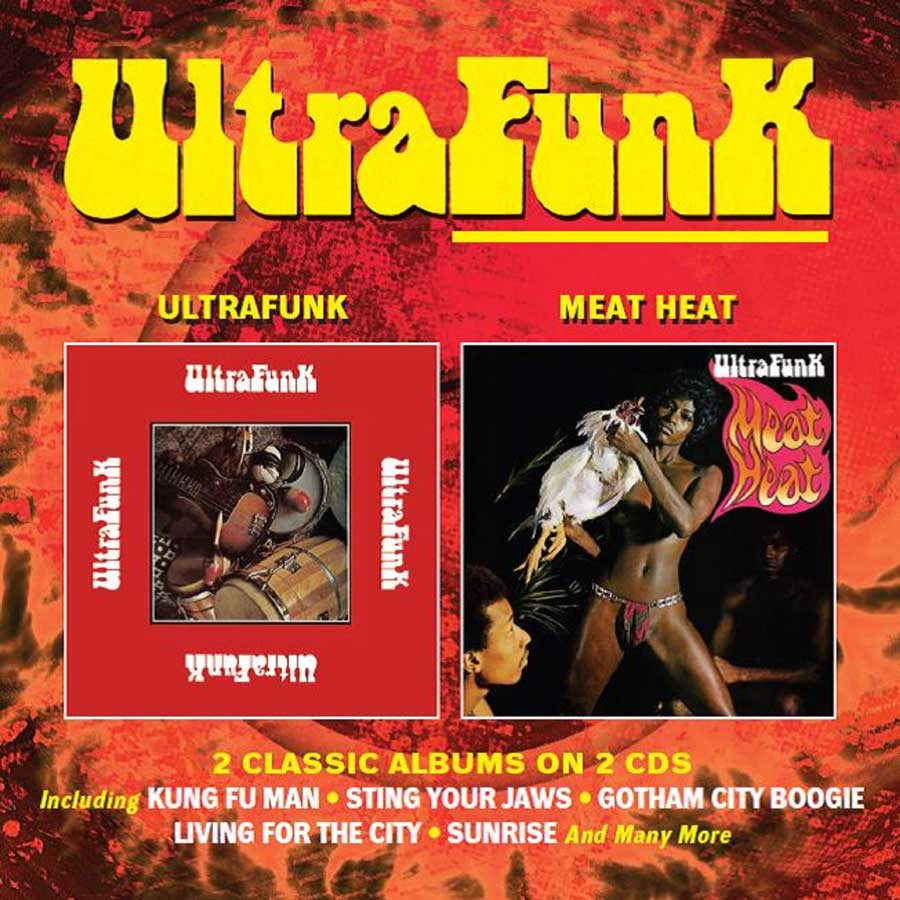 Robinsongs bring you a couple of rare gems from the Contempo Vaults – Ultrafunk’s 1975 and 1977 albums: “Ultrafunk” & “Meat Heat”.

Robinsongs bring you a couple of rare gems from the Contempo Vaults – Ultrafunk’s 1975 and 1977 albums: “Ultrafunk” & “Meat Heat”.

Although chart success eluded Ultrafunk, if you were on the club circuit in the seventies, you would have danced the night away to some of the fantastic Ultrafunk singles.

The “Ultrafunk” self-titled album kicked off with ‘Kung Fu Man’ that featured the vocals of Mr. Superbad himself Freddie Mack, the face and voice of the “Superbad” compilation series. This unique package brings you the full-length album version, plus the 7” version and instrumental version as bonus tracks. Also featured on the album are ‘Sting Your Jaws’ Part One & Two.

Ultrafunk liked to put their spin on some of the great soul tracks that were around at the time, so you will find versions of Stevie Wonder’s ‘Living For The City’ and ‘I Wish’, along with Bill Withers’ ‘Use Me’ and ‘Who Is He And What Is He To You’. The package also contains B sides that were not included on the original albums.

Notice: id was called incorrectly. Product properties should not be accessed directly. Backtrace: require('wp-blog-header.php'), require_once('wp-includes/template-loader.php'), include('/themes/xstore/woocommerce/single-product.php'), wc_get_template_part, load_template, require('/themes/xstore/woocommerce/content-single-product.php'), do_action('woocommerce_after_single_product_summary'), WP_Hook->do_action, WP_Hook->apply_filters, woocommerce_output_product_data_tabs, wc_get_template, include('/themes/xstore/woocommerce/single-product/tabs/tabs.php'), wpb_new_product_tab_content, WC_Abstract_Legacy_Product->__get, wc_doing_it_wrong Please see Debugging in WordPress for more information. (This message was added in version 3.0.) in /home/cherryredco/public_html/wp-includes/functions.php on line 4986
DISC ONE: ULTRAFUNK
1. KUNG FU MAN (Featuring Mr. Superbad)
2. BOOGIE JOE THE GRINDER
3. WHO IS HE AND WHAT IS HE TO YOU
4. STING YOUR JAWS (PART ONE)
5. STING YOUR JAWS (PART TWO)
6. USE ME
7. BUFFALO SOLDIER
8. SWEET F.A.
9. LIVING FOR THE CITY