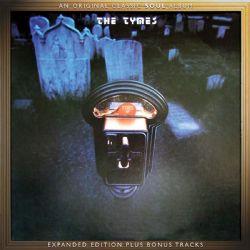 Tymes Up (Expanded Edition)
Tymes (The)

SKU: SMCR5119
Categories: 9.95, Physical, Sitewide Sale, SMR Sale, SoulMusic Records
Share:
Description
• Philadelphia-based group The Tymes – who first came to prominence in 1963 with the timeless classic ‘So Much In Love’ – ended a six-year dry spell as chartmakers in 1974 with ‘You Little Trustmaker’ (a Top 20 hit in the US and UK), marking the beginning of a new period of success for the famed vocal harmony team.
• Following the success  of their first RCA album (entitled Trustmaker which included the UK chart topper, ‘Ms. Grace’), the group – consisting of original members Al Berry,  George Williams and Norman Burnett along with Donald Banks, Wade Davis and Jerry Ferguson) –cut TYMES UP with longtime mentor, manager, producer and songwriter Billy Jackson at the helm.

• Recorded at famed Sigma Sound studios in both New York and Philadelphia, the sessions for TYMES UP included such renowned personnel as arranger Richie Rome, conductor Don Renaldo (with the TSOP horns and strings) and top players, drummer Bernard Purdie and guitarist Cornell Dupree.  Ace remix producer Tom Moulton mixed the entire project and TYMES UP became a Top 40 R&B LP.
• Primary hit single from the LP was ‘It’s Cool’ (which reached No. 3 on the US R&B charts), penned by the team of Chuck Jackson & Marvin Yancy (at the time, producing consistent hits with Natalie Cole); other singles included ‘Only Your Love’ and ‘To The Max(imum),’ both Top 3 Billboard-charted Disco Singles.
• This 2014 expanded edition marks the first CD reissue of the LP worldwide, includes two single edits and liner notes by renowned UK writer Charles Waring with quotes from songwriter (and future recording artist) Fonzi Thornton.
Available 17/03/2014
Additional information
Tracklist
1.  ONLY YOUR LOVE BONUS TRACKS
2.  IT'S COOL          9.   GOD'S GONNA PUNISH YOU (US single edit)
3.  IF I CAN'T MAKE YOU SMILE 10. ONLY YOUR LOVE (US single edit)
4.  GOD'S GONNA PUNISH YOU
5.  HYPNOTIZED 3
6.  GOIN' THROUGH THE MOTIONS
7.  TO THE MAX(IMUM)
8.  GOOD MORNING DEAR LORD