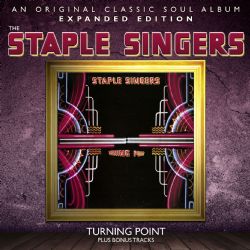 Released on 23rd of January. Known as the first family of gospel, The Staple Singers were established as international hit-makers thanks to classics such as ‘Respect Yourself’ and ‘I’ll Take You There,’ recorded for Stax Records in the ‘70s. After recording for Warner Brothers and 20th Century Records, the group (Pops, Mavis, Yvonne and Cleotha) signed with Private I Records and released TURNING POINT, their debut album for the label in 1984.

All but two tracks were produced by Pervis Staples and Stax producer/engineer Henry Bush and featured a number of key Memphis musicians. Gary Goetzman and Mike Piccirillo (who had worked with various artists including Thelma Houston and Smokey Robinson) were responsible for ‘This Is Your Night’ and ‘Slippery People,’ a song composed by guitarist David Byrne, lead singer of Talking Heads who had recorded the song a year earlier. Byrne was one of the musicians on the Staples’ recording session of the song.