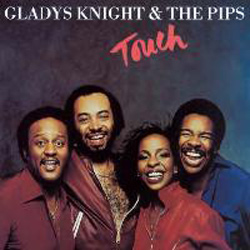 Released on 22/02/10. Gladys Knight was born on May 28 1944 in Atlanta, Georgia, has been singing since the age of seven when she won the famous TV show Ted Macks Amateur Hour in 1952. A family group was formed featuring her brother, sister and cousins, named The Pips. They charted with their debut in 1961, a revival of the Johnny Otis song, Every Beat Of My Heart .

Signed to Motown in 1966 they embarked on a long run of hits both singles and albums including, I heard It Through The Grapevine, before the Marvin Gaye version was released. In 1973 they joined Buddah Records and consolidated their success becoming one of Americas leading attractions on record and in performance. They achieved a pop No 1 with Midnight Train To Georgia and followed it with, I’ve Got To Use My Imagination, Best Thing That ever Happened To Me and On And On. They joined Columbia records in 1979. Touch was their third album released in 1981and the second to be produced and mainly written by Ashford And Simpson.

The three singles culled from the album were If That will Make You Happy R&B No.37, I Will Fight R&B No.21 and A Friend Of Mine R&B No.50. The album closes with a rousing version of Gloria Gaynor’s I Will Survive recorded live.

Notice: id was called incorrectly. Product properties should not be accessed directly. Backtrace: require('wp-blog-header.php'), require_once('wp-includes/template-loader.php'), include('/themes/xstore/woocommerce/single-product.php'), wc_get_template_part, load_template, require('/themes/xstore/woocommerce/content-single-product.php'), do_action('woocommerce_after_single_product_summary'), WP_Hook->do_action, WP_Hook->apply_filters, woocommerce_output_product_data_tabs, wc_get_template, include('/themes/xstore/woocommerce/single-product/tabs/tabs.php'), wpb_new_product_tab_content, WC_Abstract_Legacy_Product->__get, wc_doing_it_wrong Please see Debugging in WordPress for more information. (This message was added in version 3.0.) in /home/cherryredco/public_html/wp-includes/functions.php on line 4986
I Will Fight / If That'll Make You Happy / Baby, Baby Don't Waste My Time / A Friend Of Mine / Love Was Made For Two / God Is / Changed / Reach High / I Will Survive