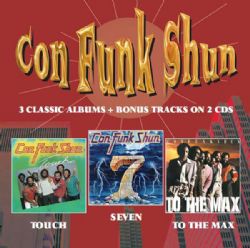 SKU: CDBRED519
Categories: 10.95, Cherry Red Records, Physical, Robinsongs, Sitewide Sale
Share:
Description
Following the success of the Con Funk Shun 2 on 1 package “Loveshine” & “Candy”, Robinsongs is following it up with 3 albums on 2 CD’s “Touch”, “Con Funk Shun 7” & “To The Max” of which “Touch” & “To The Max” have not been previously released on Compact Disc.
These 3 albums include the singles “Too Tight”, “Lady’s Wild”, “Bad Lady”, “Straight From The Heart”, “Ain’t Nobody Baby”, “Ms Got The Body” & “You Are The One”.
“Too Tight” being a Top Ten R&B Hit back in 1980, also featured on this fantastic package are the 12” extended versions of “Lady’s Wild”, “Body Lovers” & “Ms Got The Body”.
All three albums were produced by Con Funk Shun who were formed by classmates Michael Cooper & Louis McCall back in 1969.
Con Funk Shun remain one of the most sampled bands in R&B & Hip Hop.
You can still experience the Con Funk Shun sound as the band are still performing live with concerts booked this Autumn & Winter across America.
Additional information
Tracklist
Disc One: Touch Too Tight / Lady’s Wild / Give Your Love To Me / Pride And Glory / Kidnapped / Welcome Back To Love / Touch / Can’t Say Goodbye / Play Widit / Bonus Tracks – Lady’s Wild 12 Version / Body Lovers 12 Version / Seven - Bad Lady / I’ll Get You Back / Body Lovers / Promise You Love / Disc Two: Seven Continued - If You Re In Need Of Love / Straight From The Heart / A Song For You / California 1 / To The Max / Ms Got The Body / Lets Ride And Slide / Everlove 3:48 / Hide & Freak. / You Are The One / Take It To The Max / Love Strain. / Ain’t  Nobody Baby / T.H.E Freak / Bonus Tracks - Ms Got The Body - 12 Version / Ms Got The Body - Instrumental Version
Reviews (0)