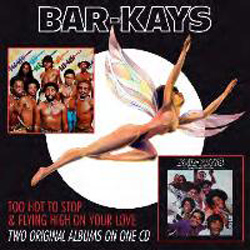 Too Hot To Sleep / Flying High On Your Love
Bar-Kays

These two consecutively released albums marked the second coming of The Bar-Kays in 1976 and 1977. The original group’s first single “Soul Finger” had become an instant classic and international hit which is still popular today.

Stax’s top artist, Otis Redding chose the band to be his regular road musicians a decision that ended in tragedy on December 10th 1967 when Redding, King, Caldwell, Jones and Cunningham all perished when their private plane crashed. Only Ben Cauley survived and James Alexander had not boarded the flight.

Despite this tragedy Cauley and Alexander with Allen Jones helped reformed the group which culminated in their work with Isaac Hayes on the pioneering 1969 album, “Hot Buttered Soul”.

In 1971 the group hired their first lead vocalist Larry Dodson and his unique vocals and James Alexander’s cranked to the max bass really was the new Bar-Kays, with no other pretensions than aiming straight for the dance floor with a series of funk workouts that set the template for many of the groups that followed during the late 70s.

If there was a sub-genre of funk called Southern Funk The Bar-Kays were the leaders and were one of the hottest acts around “Too Hot Too Stop” was perhaps their finest hour and the following years “Flying High On Your Love” confirmed their stature.

Notice: id was called incorrectly. Product properties should not be accessed directly. Backtrace: require('wp-blog-header.php'), require_once('wp-includes/template-loader.php'), include('/themes/xstore/woocommerce/single-product.php'), wc_get_template_part, load_template, require('/themes/xstore/woocommerce/content-single-product.php'), do_action('woocommerce_after_single_product_summary'), WP_Hook->do_action, WP_Hook->apply_filters, woocommerce_output_product_data_tabs, wc_get_template, include('/themes/xstore/woocommerce/single-product/tabs/tabs.php'), wpb_new_product_tab_content, WC_Abstract_Legacy_Product->__get, wc_doing_it_wrong Please see Debugging in WordPress for more information. (This message was added in version 3.0.) in /home/cherryredco/public_html/wp-includes/functions.php on line 4986
Too Hot To Stop / Too Hot To Stop Pt. 1 / Cozy / Bang Bang (Stick ‘Em Up) / Spellbound / Shake Your Rump To The Funk / You're So Sexy / Summer Of Our Love / Whitehouseorgy / Flying High On Your Love / Shut The Funk Up / Standing On The Outside / Woman Of The Night / Whatever It Is / Can't Keep My Hands Off You / Let's Have Some Fun / Attitudes / You Can't Run Away / Flying High On Your Love