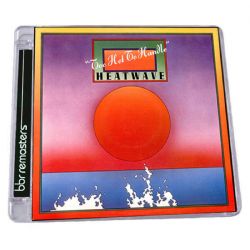 · The smoothest of seventies R&B outfits, HEATWAVE crossed many borders, laying claim to huge hits like Boogie Nights, The Groove Line, Gangsters Of The Groove and Always And Forever, which had a great impact on both sides of the Atlantic. The members of Heatwave hailed from all over the globe making this group a truly international act which contributed to their unique and influential sound.

· With every tracked penned by keyboardist Rod “Thriller” Temperton TOO HOT TO HANDLE (R&B #7/Pop #12) was Heatwave’s debut LP released in 1976 on GTO Records and heralded a run of commercial and critical success into the 80’s on four more outstanding LP’s which you will also find remastered and expanded in the BBR catalogue.
· The stand out tracks include the worldwide disco/funk smash “Boogie Nights” (Pop #2/R&B #5/UK #2), the slick title track “Too Hot To Handle” (UK #12), the slow jam ballad guided by Johnnie Wilder’s stunning vocal “Always And Forever” (R&B #2/Pop #18/UK #9) as well as dance floor hits like “Ain’t No Half Steppin’” and “Super Soul Sister”. Also featured are the non-lp hit “Slip Your Disc To This” (UK #12), and “Turn Out The Lamplight” which was later covered by George Benson on his Quincy Jones produced Give Me The Night album.
· BBR is proud to offer TOO HOT TO HANDLE. Beautifully remastered and repackaged complete with extensive liner notes and added bonus content this BBR Remaster is perfect for all R&B, Soul, Funk, Disco and Dance fans out there! Get it while you can!
1. TOO HOT TO HANDLE
2. BOOGIE NIGHTS
3. AIN’T NO HALF STEPPIN’
4. ALWAYS AND FOREVER
5. SUPER SOUL SISTER
6. ALL YOU DO IS DIAL
7. LAY IT ON ME
8. SHO ‘NUFF MUST BE LUV
9. BEAT YOUR BOOTY
BONUS TRACKS
10. TURN OUT THE LAMPLIGHT
11. SLIP YOUR DISC TO THIS
12. SPECIAL OFFER
13. BOOGIE NIGHTS (Single Version)
14. TOO HOT TO HANDLE (Single Version)
15. ALWAYS AND FOREVER (Single Version)
16. AIN’T NO HALF STEPPIN’ (Alternative Mix)
17. BOOGIE NIGHTS (U.S. 12” Disco Version)
PLEASE NOTE THIS ALBUM IS RELEASED ON 1ST JUNE 2015 AND WILL NOT BE DESPATCHED BEFORE THAT DATE
Additional information
Tracklist
TRACK LIST AS ABOVE
Reviews (0)