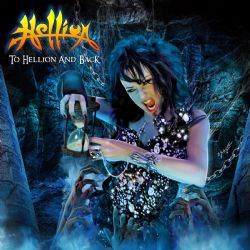 • Led by the inimitable Ann Boleyn, “To Hellion And Back” is the first comprehensive career overview from this semi-legendary, exciting and highly influential, female-fronted Los Angeles based heavy metal band.

• Featuring many rare and unreleased tracks, as well as songs that have been long out of print and unavailable on CD, this 2-disc set kicks off with songs from their 1983 self-titled mini-album, one of the best records of that year according to Kerrang! magazine, through their 80s heyday with tracks from “Screams In The Night” and “Postcards From The Asylum”,  right up to the current line-up. Produced by Ken Scott (famed for his work with the Beatles and David Bowie), ‘Hell Hath No Fury’ is taken from the forthcoming new CD, “Karma’s A Bitch”.

3. DON’T TAKE NO FOR AN ANSWER

5. UP FROM THE DEPTHS

6. RUN FOR YOUR LIFE

9. SCREAMS IN THE NIGHT