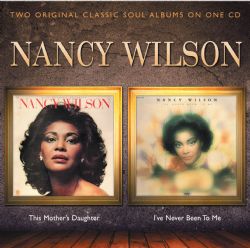 In 2011, SoulMusic.com Records reissued two of Nancy’s Capitol LPs, “All In Love Is Fair” and “Come Get To This” on one CD (SMCR 5010); the two follow-upalbums, much in demand by Nancy’s many fans worldwide, THIS MOTHER’S DAUGHTER (1976) and I’VE NEVER BEEN TO ME (1977) are being released for the first time worldwide on CD with this exciting reissue.

A Top 50 R&B album, I’VE NEVER BEEN TO ME was produced by the late Gene Page, who had worked with Nancy on ‘All In Love Is Fair’ and ‘Come Get To This’ and also featured a strong complement of musicians including Ray Parker Jr, Jay Graydon, David T. Walker, Wilton Felder, Sonny Burke James Gadson, Paulihno Da Costa, Jack Ashford.Released on 13/02/12. Song stylist Nancy Wilson recorded over forty albums for Capitol Records between 1960-1980 and by the mid-‘70s, her musical focus was on creating records that aimed at the soul music and burgeoning smooth jazz market.

Press:- “This Mother’s Daughter is arguably Wilson’s strongest long player of the ‘70s. McDaniel’s production is superb and he expertly corrals the talents of session luminaries such as Chuck Rainey, Steve Gadd, Blue Mitchell, Dave Grusin and George Duke to bring some strong material to life.”