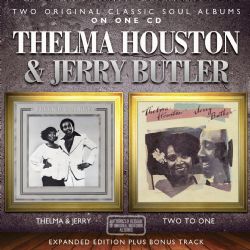 Continuing to reissue classic original albums from the Motown catalogue, SoulMusic Records is very proud to present the worldwide reissue debut* of two albums by THELMA HOUSTON and JERRY BUTLER on one CD, an expanded edition with one bonus track. (* “Thelma & Jerry” was issued on CD on US Motown in 1992).

By 1977 when they began recording together, Thelma Houston was enjoying her first wave of across-the-board international success with her now-classic cover of Harold Melvin & the Bluenotes’ ‘Don’t Leave Me This Way’; a year earlier, established hitmaker Jerry Butler had signed with Motown and released his label debut “Love’s On The Menu” (reissued by SoulMusic Records in 2013 along with his second Motown LP, “Suite For A Single Girl,” SMCR-25086).

With production by Butler himself and Homer Talbert and Motown hitmaker Hal Davis and Michael B. Sutton, THELMA & JERRY (a US Top 20 R&B album) included covers of Stevie Wonder’s ‘Joy Inside My Tears’;  a medley of Chicago’s ‘If You Leave Me Now’ with The Bee Gees’ ‘Love So Right’; and a Top 100 R&B charted single, ‘It’s A Lifetime Thing’ (the flipside of which “Kiss Me Now” is included on this CD reissue as a bonus track).

The follow-up 1978 LP TWO TO ONE consisted of just two Houston-Butler duets (left over from sessions for the previous album) and three solo tracks from each performer.