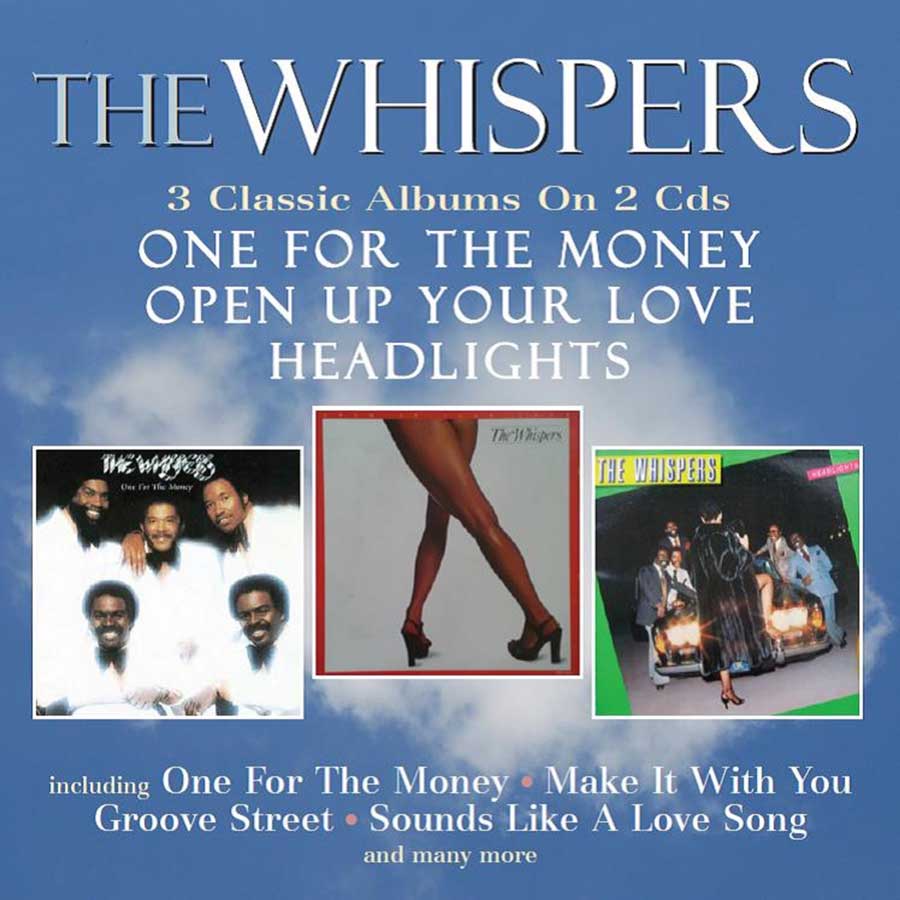 The Whispers: One For The Money / Open Up Your Love / Headlights, 3 Classic Albums On 2 CDs

Robinsongs is very proud to announce the release of three Whispers albums: “One For The Money”, “Open Up Your Love” and “Headlights” on a double CD.

Robinsongs is very proud to announce the release of three Whispers albums: “One For The Money”, “Open Up Your Love” and “Headlights” on a double CD.

The “One For The Money” album was originally released in 1976 on the Soul Train Label, and featured the R&B Top Ten Hit of the same name and the follow up single ‘Living Together (In Sin)’, which just missed the R&B Top Twenty. This package also includes the 7” versions of the tracks ‘You’re Only As Good As You Think You Are’ and ‘Sounds Like A Love Song’ as bonus tracks on disc two.

Following up the “One For The Money” album was the 1977 release “Open Up Your Love”, also released on the Soul Train label. It kicked off with a soulful cover of Bread’s ‘Make It With You’, which gave the group another R&B Top Ten Hit. Other stand out tracks on “Open Up Your Love” are ‘Chocolate Girl’ and ‘I Fell In Love Last Night (At The Disco)’.

The third album in this package is “Headlights” originally released in 1978 this time on Solar Records, Again, the album included a R&B Top Ten Hit ‘(Let’s Go) All The Way’ and, just missing out on the Top Ten, ‘(Olivia) Lost And Turned Out’. Probably the best track on the album is ‘The Planets Of Life’ which was not released as a single; if you don’t know this track you really need to check it out!

This package features sleeve notes by Christian John Wikane, a New York based music journalist who interviewed Walter Scott of The Whispers, who described these three albums as the exciting new phase of The Whispers’ career: “The early days of Solar Records were just incredible.”

Notice: id was called incorrectly. Product properties should not be accessed directly. Backtrace: require('wp-blog-header.php'), require_once('wp-includes/template-loader.php'), include('/themes/xstore/woocommerce/single-product.php'), wc_get_template_part, load_template, require('/themes/xstore/woocommerce/content-single-product.php'), do_action('woocommerce_after_single_product_summary'), WP_Hook->do_action, WP_Hook->apply_filters, woocommerce_output_product_data_tabs, wc_get_template, include('/themes/xstore/woocommerce/single-product/tabs/tabs.php'), wpb_new_product_tab_content, WC_Abstract_Legacy_Product->__get, wc_doing_it_wrong Please see Debugging in WordPress for more information. (This message was added in version 3.0.) in /home/cherryredco/public_html/wp-includes/functions.php on line 4986
DISC ONE
ONE FOR THE MONEY
1. ONE FOR THE MONEY
2. LIVING TOGETHER (IN SIN)
3. PUT ME IN THE NEWS
4. YOU'RE ONLY AS GOOD AS YOU THINK YOU ARE
5. SOUNDS LIKE A LOVE SONG
6. I'VE GOT A FEELING
7. IN MY HEART