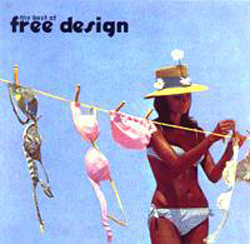 SKU: CDMRED194
Categories: 9.95, Cherry Red Records, Cherry Red Sale, Physical, Sitewide Sale
Share:
Description
Free Design originally hailed from the US east Coast and recorded 7 albums for Enoch Light’s famed Project 3 label between 1967 and 1973. Their music has been described as ‘uniquely exquisite vocal harmonies with feather-light jazz-pop instrumentation. They had a minor hit with ‘Kites Are Fun’ in 1967 and then started to gather a significant cult following in Japan. Their catalogue was re-issued there in 1994 and since then there have been a few imports available in the UK which has been enough to generate substantial acclaim from, and indeed provide significant influence for British acts such as Stereolab, The High Lamas and Saint Etienne. Quite surprisingly this is the first domestic release of any kind for Free Design in the UK. It has extensive sleeve notes by noted North American journalist and band confidant Michael White. This release is particularly significant as then original band has recently reformed to record a new album.
Additional information
Tracklist
Reviews (0)