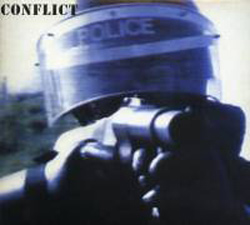 This album made in Wales at Motorhead’s Rockfield studios, inspired a generation to take action and stand up for what they believe in. The slogan displayed tens of thousands of times on shirts, stickers, badges, patches or simply written wherever, whenever, by whoever wanted, became direct action’s calling card.

A movement – anti-political with no leaders, system or rules started to fight back against political minds, the police and authority itself. ‘The Ungovernable Force’ – considered by all involved as Conflict’s ‘coming of age’ remains unprecedented. Ahead of its time, this classic album promised by vocalist Colin Jerwood, mixed hard hitting simple rock with opera singers, choirs and orchestras.

The best selling Conflict album ever, containing the Animal Rights anthem ‘This is the A.L.F.’ – the lyrics which are banned from reproduction, is now remastered properly from tapes and packaged in a deluxe digipack containing full lyric and information book and photographs previously unavailable.