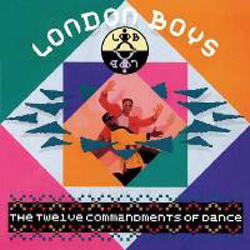 These sought-after full-length mixes feature exclusively on this Special Edition, issued together for the very first time. The extensive CD booklet includes full lyrics, additional photos and discography and brand new sleeve notes. The London Boys were Edem Ephraim and Dennis Fuller, who met at school in Greenwich before moving to Hamburg in 1981. The nickname they had been given by the locals became their stage name when they launched a pop career in 1986.

Over the next decade, they sold 4.5 million records worldwide, with major success across Europe and Japan. Tragically, Edem and Dennis died in a car crash in the Austrian Alps in 1996. “The Twelve Commandments Of Dance” follows successful Special Editions of classic PWL albums from Princess, Lonnie Gordon and Mandy Smith, and coincides with the release of Sinitta’s “The Hits+ Collection” on Cherry Pop.