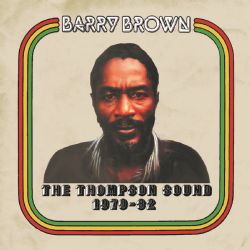 •    Following the likes of Johnny Clarke and Linval Thompson, Barry Brown (born c. 1962) was one of those Jamaican singers whose career came to the fore in the era when roots reggae morphed into the early dancehall period in late 70’s and early 80’s.

•    Barry Brown paid his dues running errands and being a constant presence around the West Kingston recording studios before getting his break under the guidance of Bunny Lee. Brown would go on to release a string of singles and albums with Lee throughout the late 70’s, before going on to work with other producers such as Sugar Minott, King Jammy and Linval Thompson amongst many others.

•    Produced by Linval Thompson (whose voice was uncannily similar to Barry Brown’s), this album contains a couple of singles and versions recorded in 1979 as well as an albums worth of material from 1981-1982 that was shelved at the time due a perceived over-saturation of Barry Brown material doing the rounds.

•    Many tracks on CD for the first time ever.

•    Produced by Linval Thompson, recorded at Channel One, mixed at King Tubby’s by Scientist, rhythms by the Roots Radics.

•    This is a must have for those who like their conscious roots reggae backed with that heavy driving early 80’s Radics sound. An essential edition to the Barry Brown catalogue.