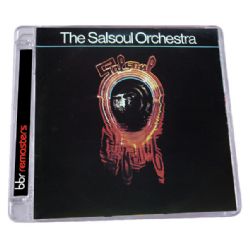 SKU: CDBBR0101
Categories: 9.95, Big Break Records, Physical, Sitewide Sale
Share:
Description
THE SALSOUL
ORCHESTRA – as well as being the legendary backing band for many of the Salsoul
Records artists – were a highly successful act in their own right. Throughout their career they consisted of up
to 50 members (many of whom were also standing members of MFSB – Philadelphia
Internationals house band). They released eleven successful albums on Salsoul
Records over a seven year period.
BBR are
delighted to release an expanded re-master of THE SALSOUL ORCHESTRA, their
debut LP from 1975. The album features the amazing singles ‘Salsoul Hustle’
(R&B #44/Pop #76), ‘Tangerine’ (R&B #36/Pop #18) and ‘You’re Just The
Right Size’ (R&B #76/Pop #88) which also featured ‘Chicago Bus Stop (Ooh I
Love It)’ as a B-side. The track went on to be regarded as a Dance classic.
BBR is delighted to launch our extensive program of expanded CD re-masters
from the legendary SALSOUL label. These in demand titles have been out of print
for almost two decades.