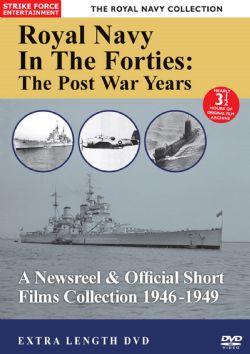 “The efficiency of the Royal Navy is still one of the most powerful factors in our continuing security.” (Newsreel Commentary, 1946)

In addition to many ‘homecoming’ ceremonies when ships returned to base after the cessation of hostilities, the post-war years were characterised by extensive Home Fleet Exercises, goodwill tours, the launch of all new ships like the HMS Vanguard battleship and the scrapping of the life expired ships like the Queen Elizabeth class.

Highlights include the 1947 Royal Naval Review in the Firth Of Clyde with over 100 ships, the combined RAF and Royal Navy Exercises of 1948 and the Combined Western union Exercises of 1949 in the Bay Of Biscay under Supreme Commander ‘Monty’.