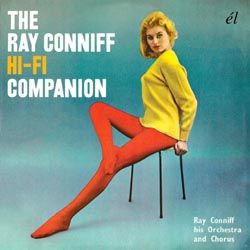 Originally released as a double album in 1958, “Hi-Fi Companion” is a perfect little mid-century time capsule, a hip, swinging, urban, yet reassuring showcase of vintage Conniff and his inimitable arrangements of some of the most popular songs of the era.

“If you believe in your art, and you love what you do, that energy will go out, and people will respond.” Ray Conniff

One of the best trombonists of the big band era – he played with Bunny Berigan and Artie Shaw – Ray Conniff burst onto the 1950s scene with recordings based on the tonal combination of mixed choir with the swing of the big band. This blend of musical colours and textures – women’s voices and trumpets, men’s voices and trombones – was organised with a geometric precision and really caught the public ear. His debut album “‘S Wonderful”, inhabited the USA Top 20 for nine months.

His breakthrough had come in 1956, with his arrangement for Don Cherry’s hit ballad ‘Band Of Gold.’ Conniff substituted a chorus of voices for a string section; they were wordless, purely instrumental, smooth, and an instant success. He went on to arrange many hits for the likes of Guy Mitchell, Marty Robbins, Johnnie Ray and Rosemary Clooney before Columbia gave him the chance to record with his own orchestra.

Conniff, in fact, founded two groups: his “Orchestra and Chorus” and his “Singers.” The former was a typical big band line-up of saxes, trumpets, trombones, and rhythm section and a chorus of four men and four women. The latter was a chorus of 25 singers – 12 women and 13 men – with minimal instrumental backing.

Originally released as a double album in 1958, “Hi-Fi Companion” is a perfect little mid-century time capsule, a hip, swinging, urban, yet reassuring showcase of vintage Conniff and his inimitable arrangements of some of the most popular songs of the era.

It has been said that If Mantovani is the epitome of elevator music, Ray Conniff is the epitome of super-market music. For the public who would buy 70 million copies of his albums and give him 25 straight Top 40 LPs during the 1950s and 1960s, the “Ray Conniff Sound” defined easy-listening; a phenomenon which became a fixed star on the horizon of pop music.

N.B: This title is released 18th September 2015 and will not be dispatched until this date.

1. YOU DO SOMETHING TO ME

2. THEY CAN’T TAKE THAT AWAY FROM ME 3. HELLO, YOUNG LOVERS

5. ALL THE THINGS YOU ARE

6. PEOPLE WILL SAY WE’RE IN LOVE

7. ON THE STREET WHERE YOU LIVE

9. THE WAY YOU LOOK TONIGHT

11. SMOKE GETS IN YOUR EYES

14. THANKS FOR THE MEMORY

GROWN ACCUSTOMED TO HER FACE

21. AN IMPROVISATION ON “DANCE OF THE SUGAR