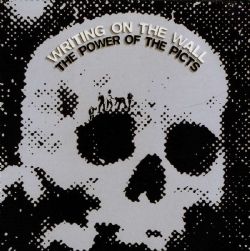 The Power Of The Picts
Writing On The Wall

·      Scottish heavy rock band The Writing On The Wall made it big on the underground rock scene in the late 1960’s through a highly dramatic stage act. They regularly played the Middle Earth club, went on tour with the likes of Ten Years After, held a lengthy residency at the Marquee where they were supported by up and coming acts such as Wishbone Ash. As others retreated to “be-denimed slothfulness” The Writing On The Wall became more theatrical , featuring choreographed fights, dressing up as a Caveman, a High Priest, a Monk and a Witchfinder, and the destruction of a Bubble car in support of the recently introduced breathalyser test. Melody Maker felt sufficiently disturbed to comment that the band had ‘the reputation of being violent to frightening extremes’. However John Peel was suitably impressed and the band recorded two Top Gear sessions for Radio 1.

·      The Middle Earth club launched a label with this maniacal rock band as lead off act, releasing a single and LP in 1969. Both items today are rare, and highly collectable, holding their worth in the Price Guides. These items form Disc one of this Power of the Picts double CD collection, its title repeating the title of the only LP . The band continued to record demos but a second LP deal failed to materialise with any label. Live work continued to impress and in 1972 they were invited to play in Brazil at the Rio Song Festival, which they did in front of a 60,000 live audience and millions of South American TV viewers.

Enough was earned to fund the recording of a full second LP . Although never released, from it came the bands most fully realised creation, the song Buffalo, managing at turns to be both menacing and elegiac. A severely truncated version was released as a single by PYE in 1973 and graces comps today such as Sanctuary’s ‘Gather in The Mushrooms’.

DISC ONE: POWER OF THE PICTS

1.IT CAME ON A SUNDAY

10.CHILD ON A CROSSING

7.DREAM YOURSELF A HERO