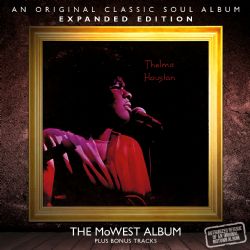 One of the five releases that comprise SoulMusic Records’ October 2012 “Motown-themed” month (featuring artists who recorded at some point for the globally famous label), THELMA HOUSTON was the impressive MoWest 1972 debut by the talented songstress whose first album, the 1969 Jim Webb-produced “Sunshower” LP was critically acclaimed and established Thelma as an important then-new artist.

Making its worldwide CD debut with this long-awaited reissue, THELMA HOUSTON (The MoWest Album) – considered a Motown musical treasure – has long been in demand by Motown and soul music lovers everywhere: with first class arrangements by Gene Page, Artie Butler and Michael O’Martian and primary production by Joe Porter, the album included excellent material – with songs penned by Patti Dahlstrom and the team of Barry Mann & Cynthia Weil among others alongside Thelma’s soulful cover of Janis Joplin’s hit ‘Me And Bobby McGee.’

In the UK, the original US album was released with a slightly different track list and five additional cuts including songs by the Motown team of Gloria Jones & Pam Sawyer as well as Thelma’s fiery take on soul singer Paul Kelly’s ‘Stealing In The Name Of The Lord.’ Those tracks are on this expanded edition along with four sides that comprised two non-album MoWest singles including Thelma’s version of the Berry Gordy Jr. song, ‘I Want To Go Back There Again’ (originally recorded by Chris Clark).