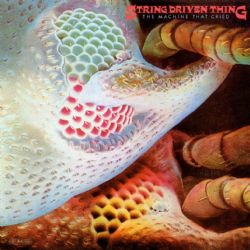 SKU: ECLEC2346
Categories: 10.95, Esoteric Recordings, Esoteric Sale, Physical, Sitewide Sale
Share:
Description
NEWLY EDITION
OF THE CLASSIC 1973 ALBUM BY STRING DRIVEN THING
REMASTERED
FROM THE ORIGINAL CHARISMA MASTER TAPES
WITH TWO BONUS
TRACKS
BOOKLET WITH
FULLY RESTORED ARTWORK & NEW ESSAY
Esoteric Recordings are pleased to announce a new
edition of the classic 1973 album THE
MACHINE THAT CRIED by STRING DRIVEN THING – re-mastered from the original
Charisma Records master tapes.
Formed in Glasgow in 1967 around the husband and
wife CHRIS ADAMS and PAULINE ADAMS and JOHN MANNION, by 1972 the band had moved
from their purely folk roots and had signed to CHARISMA RECORDS, recording
their self-titled album for the label with new members GRAHAM SMITH (violin)
and COLIN WILSON (bass, guitar). For their 1973 album, THE MACHINE THAT CRIED, the band was expanded further by the
addition of drummer BILLY FAIRLEY. This record was arguably the finest ever
released by the band, featuring such classics as ‘HEARTFEEDER’, the album’s
title track and ‘SOLD DOWN THE RIVER’.
This Esoteric Recordings reissue has been newly re-mastered
from the original CHARISMA RECORDS master tapes and features two bonus tracks
drawn from the band’s 1973 single and a booklet that fully restores all
original album artwork with a new essay.Release Date: 24/09/2012
Additional information
Tracklist