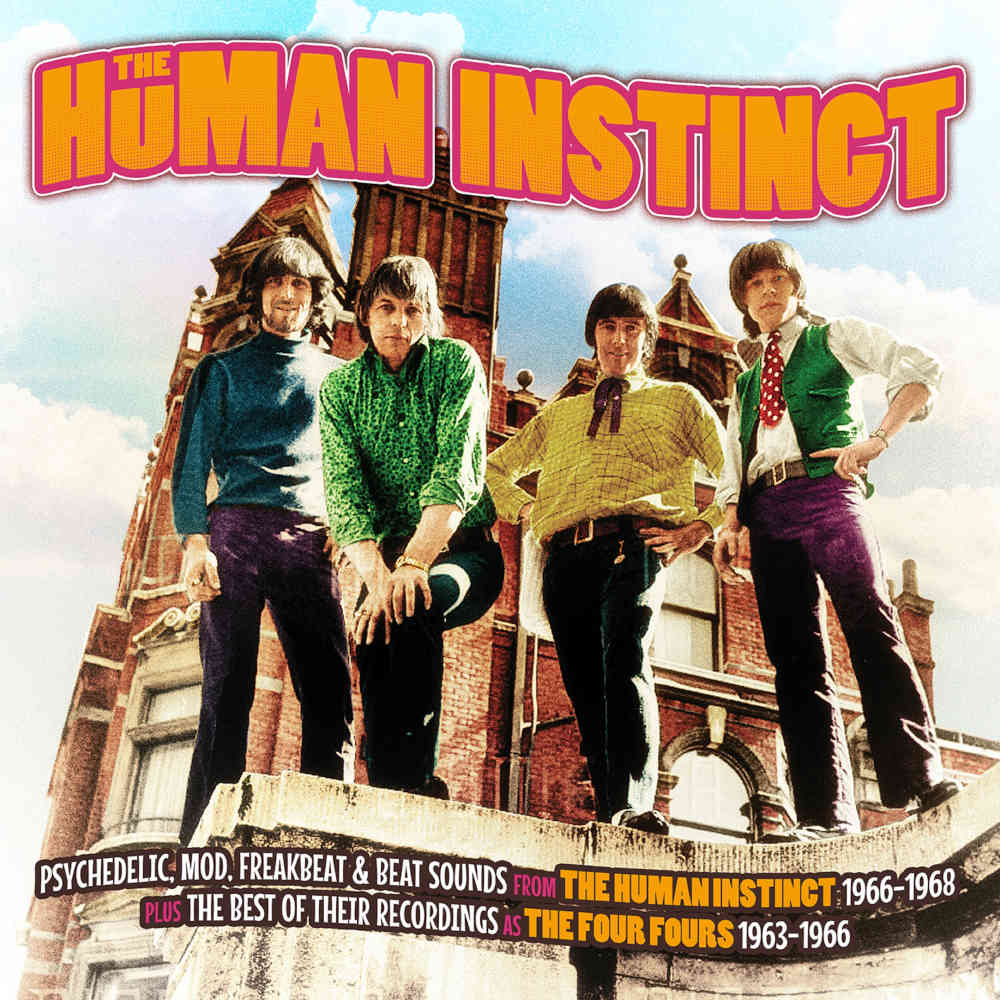 For the first time ever on CD you can now hear the early incarnation of the group on their 1966-1968 Mercury/Deram singles, all in one place.

Legendary New Zealand group The Human Instinct’s reputation as a hard rock band comes on the back of their first three albums released between 1969-1972 and which are still in print on CD. These albums featured the Hendrix styled playing of Billy T.K. and it’s an incarnation of this band that still performs today.

• For the first time ever on CD you can now hear the early incarnation of the group on their 1966-1968 Mercury/Deram singles, all in one place.

• Well known to Euro pop-psych collectors especially for their pop-psych classic ‘A Day In My Minds Mind’.

• In addition we have the best of the Four Fours, the original rock’n’roll band who began recording in 1963, released 12 singles in three years, and then changed name to The Human Instinct and location to record in the UK during 1966.

• Remastered from original archive tapes, packaged with a 20 page booklet telling the story in great detail with input from the surviving band members.

• Fun fact: in their very early years an occasional lead vocal was taken by local Tauranga teenage singer Richard Smith. A few years later, adopting his mother’s maiden name of O’Brien he moved to the UK and went on to write The Rocky Horror Picture Show.

Notice: id was called incorrectly. Product properties should not be accessed directly. Backtrace: require('wp-blog-header.php'), require_once('wp-includes/template-loader.php'), include('/themes/xstore/woocommerce/single-product.php'), wc_get_template_part, load_template, require('/themes/xstore/woocommerce/content-single-product.php'), do_action('woocommerce_after_single_product_summary'), WP_Hook->do_action, WP_Hook->apply_filters, woocommerce_output_product_data_tabs, wc_get_template, include('/themes/xstore/woocommerce/single-product/tabs/tabs.php'), wpb_new_product_tab_content, WC_Abstract_Legacy_Product->__get, wc_doing_it_wrong Please see Debugging in WordPress for more information. (This message was added in version 3.0.) in /home/cherryredco/public_html/wp-includes/functions.php on line 4986
1. A DAY IN MY MIND'S MIND
2. DEATH OF THE SEASIDE
3. RENAISSANCE FAIR
4. PINK DAWN
5. THE RICH MAN
6. CAN'T STOP AROUND
7. WANT TO BE LOVED BY YOU
8. I CAN'T LIVE WITHOUT YOU
9. ILLUSIONS
10. GO-GO
11. DON'T PRINT MY MEMOIRS
12. ONE TRACK MIND
13. STINGRAY
14. FROM THE BOTTOM OF MY HEART
15. THIS TIME TOMORROW
16. YOU'RE MY BABY (AND DON'T YOU FORGET IT)
17. JUST BECAUSE
18. BABY COME BACK TO ME
19. IT'S GONNA RAIN
20. THEME FROM AN EMPTY COFFEE LOUNGE
21. TIME SLIPS AWAY
22. SHE'S GONNA GET ME
23. EVERYTIME
24. BARROW BOY
25. JUNGLE CAT