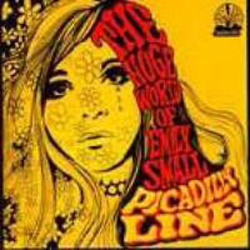 Released 19/10/09. A hugely improved sound quality re-master based on the Japanese CD edition of The Huge World of Emily Small CD. One of those albums that just seems to have slipped under the radar of most UK pop psych collectors. The band (essentially a duo lead by Rod Edwards and Roger Hand, who would later record as Edwards Hand) flourished briefly in the late 60’s releasing this one album. With them is the cream of UK session men including Danny Thompson (bass), Alan Hawkshaw (keys), Herbie Flowers (bass) and Harold McNair (flute). The Picadilly Line even managed an appearance at The Middle Earth club in London, the then hallowed centre of the UK psychedelic scene. The album is breezy post Sergeant Pepper psychedelic pop with plenty of swinging London vibes, orchestration and evocative whimsical lyrics.

Bonus Tracks
-Rosemarys Blubell Day / Gunny Sunside / Country Girl / No One Else Can See / Yellow Rainbow / I Know, She Believes / Evenings With Corinna / My Best Friend / Memories Fade / I Can Tell You Everything