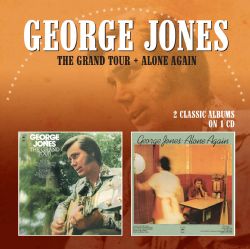 SKU: MRLL1
Categories: 9.95, Morello, Morello Christmas Sale, Physical, Sitewide Sale
Share:
Description
When Johnny Cash was asked “Who’s your favourite singer?” he responded
“you mean apart from George Jones?”
Here we have two great albums from the greatest voice in country music.
“The Grand Tour” released in 1974 features two country chart singles,
the title track reaching No. 1 and ‘Once You’ve Had The Best’ getting to No.
3. Music critic Thom Jurek in a
retrospective review rated it as one of the finest country albums of the 70s.
The other featured album “Alone Again” was originally released in 1976
and includes the No. 3 hit single ‘Her name is . . . ‘. Other titles reflect the demons George was
facing at the time with booze, pills and marital turmoil – ‘A Drunk Can’t Be A
Man’, ‘Stand On My Own Two Knees’ and ‘Right Now I’d Come Back And Melt In Her
Arms’.