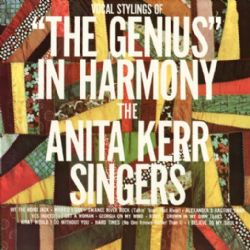 The Genius In Harmony
Anita Kerr

SKU: ACMEM249CD
Categories: 9.95, El, El Records Sale, El! Christmas Sale, Physical, Sitewide Sale
Share:
Description
The
architects of The Nashville Sound, the voices behind such eternal hits as Roy
Orbison’s Only the Lonely, Jim Reeves’ He’ll Have to Go and I’m Sorry by Brenda
Lee, The Anita Kerr Singers, through their long career, released several
“tribute” albums; Bert Kaempfert Turns Us On, The Anita Kerr Singers
reflect on the Hits of Burt Bacharach and the immensely popular, We Dig Mancini
– which defined the best of mid-sixties MOR and snatched a Grammy from under
the noses of the Beatles. “The Genius” in Harmony, released in 1962,
was their first such album, comprising songs written by or associated with Ray
Charles.
The
result of the layering of the charm and polish of the Kerr voices on

such dark material as Hard Times and Drown In My Own Tears is remarkable and
it’s difficult to understand how such a fine set can have been allowed to
languish out of print for so long.

Here’s
what Anita Kerr herself said about the project at the time: ‘It’s

about things. Ray Charles was the person chosen to express all the pent-up emotions
of the human soul: the entertainer born to spread these emotions out on the
table for the whole world to see, close up and in broad daylight.

They
call him “The Genius”. I think of him as a restless genius. One

moment he’s topping everything you’ve ever heard in blues singing, and the next
moment he moves on to old standards like Hoagy Carmichael’s Georgia On My Mind.
Before you can get used to him in that vein he’s

gospel-flavouring the songs he does, like I Got A Woman. Then he’s

knee-deep in the country field or meeting Irving Berlin head on in a song that
dates back to 1911, Alexander’s Ragtime Band. And in between all these have
come other great songs we’ve tried to interpret for you here, such as Ruby,
with its lush, soft-ballad air, the almost haunting Hard Times and the ram-paging
Hit the Road Jack. ‘Reflections on Ray Charles’ greatness in the dimen-sions of
four voices – this is what we’ve tried our very best to bring you.’

One
of the best arrangers in the business, Anita was not averse playfully

exploring the early sixties pop universe with fictitious ensembles and

featured here also are the two singles by Anita & the So & So’s,
including their sweet US hit, Joey Baby.