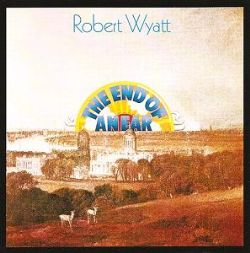 The End of an Ear
Robert Wyatt

Esoteric Recordings are pleased to announce a newly remastered edition
of the legendary debut solo album by ROBERT WYATT.

Recorded in August 1970 whilst Wyatt was still a member of SOFT MACHINE,
his first solo outing was a blend of Jazz and Experimental music that he had
pioneered on his composition ‘Moon in June’ on Soft Machine’s “Third” album.
The sessions for “THE END OF AN EAR” saw Robert Wyatt joined by guests such as
DAVE SINCLAIR of CARAVAN and SOFT MACHINE alumni MARK CHARIG and ELTON DEAN
among others.

This Esoteric Recordings reissue has been newly remastered from the
original master tapes and features a booklet that fully restores all original
album artwork with a new essay.

“It begins with deranged, high-speed voices like something out of The Goon Show, in a vaguely Latin mood and set to discordant piano. It ends 47 minutes later having made barely a concession to the protocols of melody, lyrics or song construction. The debut solo album by Robert Wyatt was a law unto itself in 1970 and is just as enigmatic today”. Paul Sexton (PROG, July 2012)

“At moments it sounds like free jazz, at others modernist sound collage, at one point, Hendrix’s ‘Purple Haze’.” 3/5* Marcus O’Dair (Jazz Wise, August 2012)

Additional information
Tracklist
1. LAS VEGAS TANGO PART ONE (REPEAT)
2. TO MARK EVERYWHERE
3. TO SAINTLY BRIDGET
4. TO OZ ALIEN DAEVID AND GILLY
5. TO NICK EVERYONE
6. TO CARAVAN AND BROTHER JIM
7. TO THE OLD WORLD (THANK YOU FOR THE USE OF YOUR BODY)
8. TO CARLA, MARSHA AND CAROLINE (FOR MAKING EVERYTHING BEAUTIFULLER)
9. LAS VEGAS TANGO PART ONE