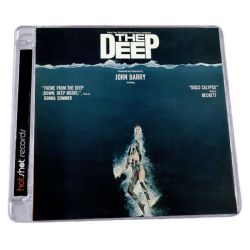 •    JOHN BARRY and DONNA SUMMER, having climbed to the pinnacle of their respective musical fields, need little introduction to avid music fans. Barry, born to the owner of a small movie theatre chain owner seemed destined to be involved in film making and has become the 20th Century’s greatest soundtrack composer, winning no less than 5 Academy Awards and remarkably none of them for his best known and most iconic work for the majority of the James Bond films. Summer, of course, is regarded by many as the Queen of Disco after her ground-breaking and Grammy Award winning collaborations with producer Giorgio Moroder and her subsequent chameleon-esque pop career.

•    Barry was at the height of his powers when he collaborated with an up and coming Summer (she had secured 2 Gold discs by this point) on this soundtrack to Peter Yates movie “The Deep” in 1977, which starred Jacqueline Bissett, Robert Shaw and Nick Nolte among others.

•    Released on Summer’s Casablanca label “The Deep” soundtrack opens with Barry’s ‘Return To The Sea – 2033 A.D.,’ a 24 minute ballet based on the theme to The Deep which showcases Barry’s subtle and intriguing soundtrack style and the only track on the first side of the original LP. Side two has three different versions of the ‘Theme From The Deep’ which the pair wrote together. The first of which ‘Theme From The Deep (Down, Deep Inside)’ (UK #5) shows Summer affecting her ‘Love To Love You’  orgasmic vocal style to great effect, and the version that closes the album “… (A Love Song),” with its slower tempo, gives her vocal an even more beguiling tone.

•    The LP also features Beckett’s “Disco Calypso,” a very pleasant contemporary dance track that provides exactly what its title suggests. Unfortunately both the film and the soundtrack have been relatively overlooked since their release but there is no question that this recording stands up to Barry’s best work, and with Summer’s involvement  together they have created a unique moment  in both soundtrack and dance music history.

•    Hot Shot Records/BBR are proud to release the soundtrack to THE DEEP, this fully re-mastered and re-packaged edition comes with superb liner notes and bonus content and is a must for all Soundtrack, Disco and Pop fans out there!

3.    THEME FROM THE DEEP (Instrumental)