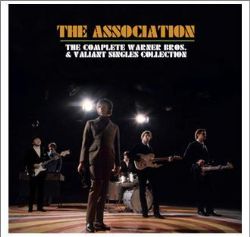 The Association were simply one of the finest, most beloved, and most commercially successful American vocal groups of the 1960s. Yet a complete singles collection of their golden Warner Bros. & Valiant years (1966-1971) has never been collected.

Although the popular six-man band initially developed a straight-laced, M.O.R. image, they were actually much more dynamic than that.

They helped pioneer the new musical genre dubbed “folk-rock” by Troubadour owner Doug Weston and fused this sound with a sophisticated vocal blend that was on par with The Beach Boys. And contrary to their hop-sack-suited image, they were all spiritual seekers, with one member, Jules Alexander, leaving the band for a pilgrimage to India nearly a year before The Beatles.