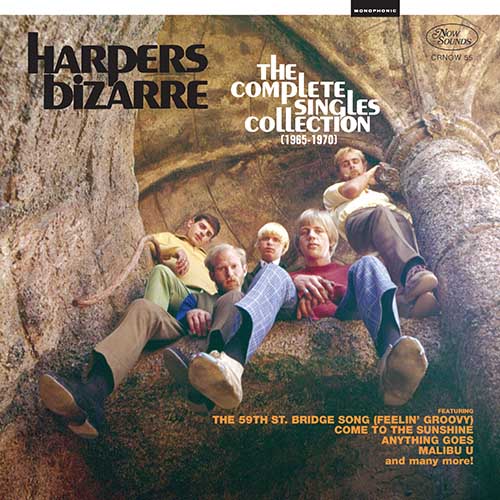 This 26-track deluxe edition includes many original mono single mixes, many of which have been out of circulation since their original release. Also included are all the pre-Harpers Bizarre singles, when the band recorded as The Tikis.  The deluxe, full-colour booklet also includes rare photos and extensive and insightful liner notes by Joe McGasko, the host of WFMU’s “Surface Noise.” Mastered by ALAN BROWNSTEIN from the ORIGINAL MASTER TAPES!
SKU: WCRNOW55
Categories: 9.95, Now Sounds, Physical, Sitewide Sale
Share:
Description
• EVERY “A” & “B” SIDE RELEASED DURING THEIR KEY ERA!
• FIRST TIME EVER COMPILED ON CD!
• SOURCED FROM THE ORIGINAL MASTER TAPES!
• INCLUDES MANY RARE MONO/ALTERNATE MIXES!

Except for their California brethren The Association, no other band of the ’60s better represents the soft pop genre than Harpers Bizarre. Their seamless combination of baroque arrangements and gossamer vocals had few equals then or now, and nowhere is their achievement better illustrated than on the run of singles they recorded for Warner Bros. Records in the late 1960s.

The four Lenny Waronker-produced albums they made in those years add dimension to the group’s story and emphasize their range, but the essence of Harpers Bizarre can be found on the 45s, which are all collected here for the first time.

What you’ll hear here is the remarkable refashioning of a four-piece guitar band enamoured with the sounds of the British Invasion into a silky-smooth vocal group supported by the cream of Los Angeles’ studio musician crop. The end result is a sound filled with so much sunshine that you might need to wear sunblock while you listen.

This 26-track deluxe edition includes many original mono single mixes, many of which have been out of circulation since their original release. Also included are all the pre-Harpers Bizarre singles, when the band recorded as The Tikis.