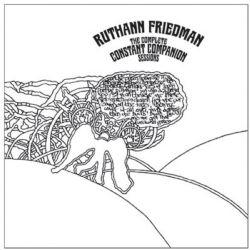 When The Association’s ‘Windy,’ reached the #1 position in July 1967, writer Ruthann Friedman didn’t just score a hit single, she also achieved a milestone: Ruthann was only the third female songwriter to compose an American #1 record without the help of a co-writer. In 1999, BMI designated the infectious smash the 61st most played song of the 20th century. But the story doesn’t end there.

Produced in 1969 by JOE WISSERT (The Turtles, Lovin’ Spoonful, Jackie DeShannon) Constant Companion is Ruthann’s only LP during the first chapter of her career. An intimate folk album replete with lysergic lyrical imagery, Constant Companion will intrigue fans of Joni Mitchell and Judee Sill.

Also included is a full album’s worth of previously-unreleased material cut during the Constant Companion era, which will undoubtedly leave the listener wondering why these tracks were hidden away all these years.

Mastered by Alan Brownstein FROM THE ORIGINAL MASTER TAPES!

The full-colour booklet includes rare photos and extensive liner notes featuring the participation of Ruthann herself!

Produced for reissue by Steve Stanley.