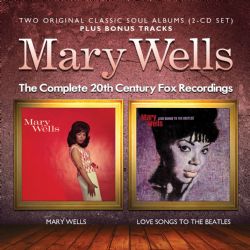 One of the five releases that comprise SoulMusic Records’ October 2012 “Motown-themed” month (featuring artists who recorded at some point for the globally famous label), MARY WELLS: THE COMPLETE 20TH CENTURY FOX RECORDINGS is – as its’ title suggests – the first-ever collection of all the tracks the late, great singer cut for the label between 1964-1965. Included are her label debut, the self-titled MARY WELLS plus six bonus tracks (which were originally released on a 1996 US compilation); and for the first time on CD worldwide, the 1965 album LOVE SONGS TO THE BEATLES Mary Wells was Motown’s first female major chartmaker, racking up hits for the label that included ‘Bye Bye Baby,’ ‘You Beat Me To The Punch,’ ‘Two Lovers’ and the all-time classic ‘My Guy.’

In 1964, she made a dramatic move to 20th Century Fox Records, the first internationally-known Motown artist to do so. 20th Century Fox – while not known as an R&B label – saw Mary as an important addition to their roster and immediately had her begin work on her all important first LP for the company. Producers included Carl Davis, Bob Bateman and Andre Williams; the resulting album yielded five R&B chart hits for Mary.

The follow-up LP (produced by Bernie Wayne and arranged by Joe Mazzu) paid homage to the phenomenal group who had invited Mary to be their special guest on a 1964 UK tour. Mary took twelve Beatles’ tunes of the day and reworked them with a touch of jazz and soul.

MARY WELLS: THE COMPLETE 20TH CENTURY FOX RECORDINGS includes notes by renowned U.S. writer Kevin Goins with quotes from producers Carl Davis and Andre Williams and others involved in the music on this historical compilation by the legendary singer.